S/o @JUCOgraphix for the dope edit. But the wait is over WEST OAKLAND TO WESTWOOD✊ saydat @UCLAFootball pic.twitter.com/MlBZ4njh03

UCLA plucked another prospect from high-school powerhouse De La Salle on Wednesday as safety/linebacker Je’Vari Anderson announced his verbal commitment to the Bruins for the 2018 recruiting class.

During two seasons at Laney, Anderson had 32 tackles and three interceptions. He was also considering Kansas State, Cincinnati and UNLV.

Kelly’s recruiting class ranks 31st in the country and fourth in the Pac-12, according to 247 Sports’ Composite Rankings. With eight commits already signed, the Bruins can ink the remainder of their recruiting class on Feb. 7, the first day of the traditional signing period. 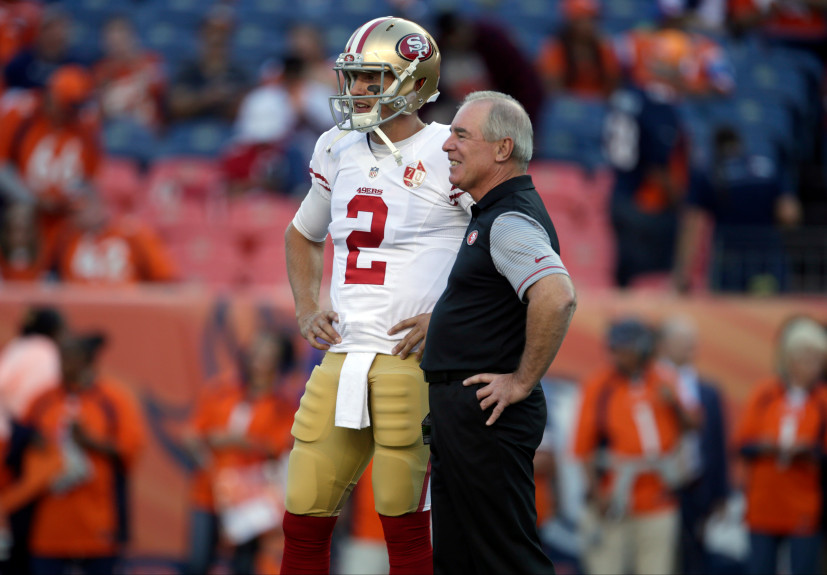 Chip Kelly‘s to-do list got one task shorter Tuesday as he finalized his coaching staff.

The new head coach announced three new hires, led by Dana Bible, who will take over as quarterbacks coach. Bible, a well-traveled assistant coach who has offensive coordinator experience in college and the NFL, will oversee UCLA’s quarterback competition this spring as the Bruins look for a new starter to replace Josh Rosen.

UCLA also officially announced the hires of Roy Manning (outside linebackers/special teams) and Vince Oghobaase (defensive line) on Tuesday and added that Jimmie Dougherty, DeShaun Foster and Hank Fraley would be returning under Kelly in the same positions they held last season. Angus McClure will return and coach tight ends.

Five-star center Moses Brown announced his verbal commitment to UCLA on Monday, giving the Bruins one of the top prospects in the country for the 2018 recruiting class.

Brown, a 7-foot-1, 241-pound McDonald’s All-American from New York City, was also considering Florida State and Maryland. He is the 18th-best prospect in the country, according to ESPN’s 100 rankings.

“I decided to choose UCLA because of the rich basketball tradition,” Brown told Slam Magazine, “I could see myself developing and working on my game and being ready for the next level.”

He is UCLA’s first five-star recruit for this class, joining signees David Singleton, Jules Bernard and Kenneth Nwuba. Singleton and Bernard are both four-star Southern California natives while Nwuba is a three-star center who is finishing his final year of high school in West Virginia.

Patrick Jolly‘s first commitment was to Scott Frost at Central Florida. Now the versatile athlete from Florida will play for Frost’s mentor.

Jolly, a three-star athlete, according to 247 Sports’ Composite Rankings, verbally committed to UCLA on Sunday, bringing head coach Chip Kelly‘s 2018 recruiting class to 13 total prospects with two and a half weeks left until National Signing Day.

Jolly committed to Frost’s Knights in June, but backed off his pledge soon after the upstart young coach took the head job at Nebraska. Frost’s uptempo offense that led the UCF to a perfect 13-0 season in 2017 was based off Kelly’s system at Oregon where the pair coached together from 2009-12.

Jolly’s only other Pac-12 offer came from Oregon State. The versatile 6-foot-1, 177-pound athlete also got looks from Rutgers and Syracuse.

Beckett is a lightly recruited defensive tackle who was previously committed to Hawaii. The 6-foot-4, 275-pound prospect is a two-star recruit, according to 247 Sports’ Composite Rankings, and had other offers from Army, Columbia, Cornell, Idaho, UC Davis and UNLV.

Although UCLA has only one defensive lineman in this recruiting class, Beckett told 247 Sports Kelly offered him as an offensive lineman, an even more urgent position of need for the Bruins who are losing three starters this season.

Etiwanda High offensive tackle Alec Anderson signed his National Letter of Intent during December’s early signing period and Mater Dei four-star offensive lineman Chris Murray is on board with a verbal commitment he announced during the U.S. Army All-American Bowl earlier this month.