Defensive coordinator Tom Bradley talks about what went wrong in the second quarter, what UCLA does to practice tackling during the week and what the Bruins need to do better.

Offensive coordinator Jedd Fisch talks about the turnovers that doomed a promising night on offense, the critical sequence in the second quarter and how he views Soso Jamabo‘s 100-yard rushing performance.

UCLA kicks off against Stanford at 7:30 p.m. at Stanford Stadium. The TV broadcast is on ESPN with radio on AM 1150. Follow our live chat below: 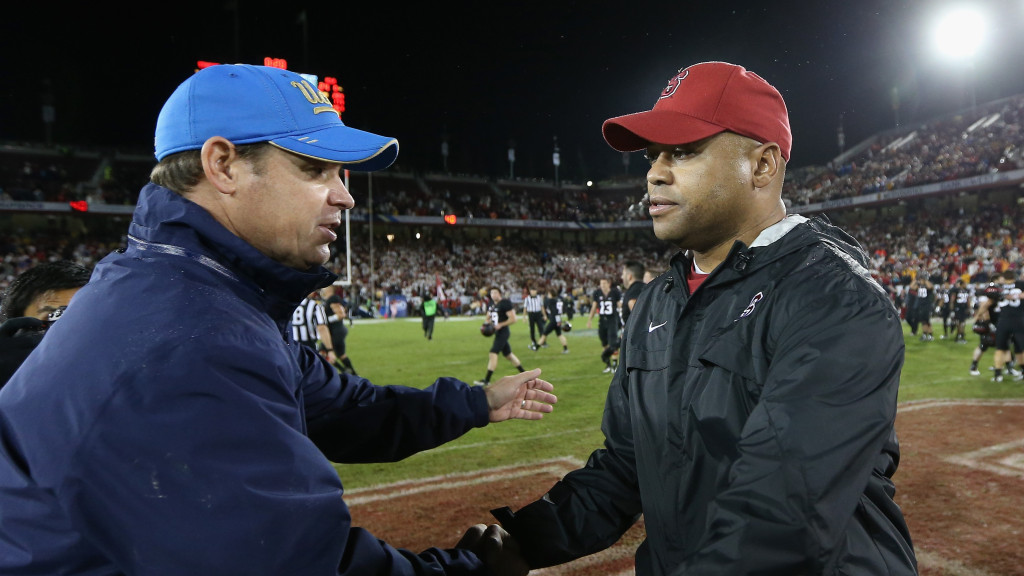 UCLA’s Jim Mora (left) will try to get his first win over Stanford and David Shaw on Saturday. (Photo by Ezra Shaw/Getty Images)

UCLA’s losing streak to Stanford is almost at double digits. The Bruins have lost nine in a row, a skid that predates head coach Jim Mora, and get their annual chance to snap it at Saturday at 7:30 p.m. at Stanford Stadium. The mighty Cardinal have looked vulnerable in the past two weeks. They lost to USC and San Diego State, giving up 478 combined rushing yards in those games.

Here is all your pregame reading: 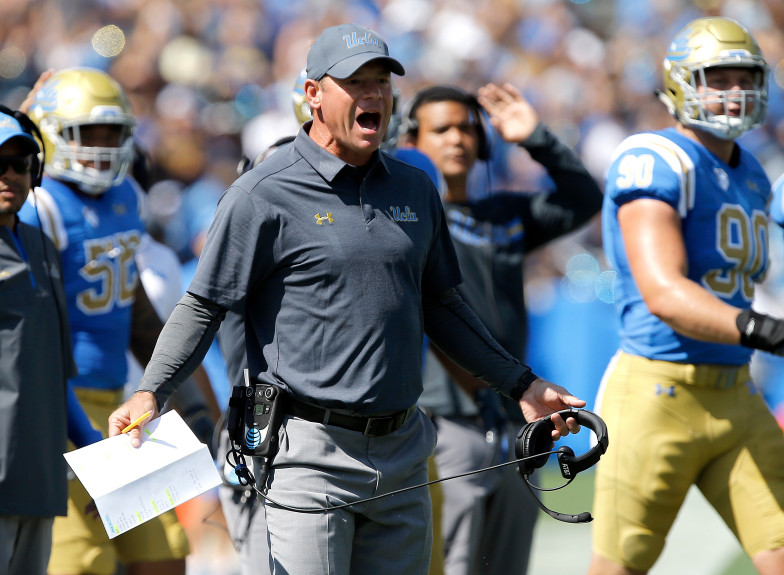 UCLA head coach Jim Mora, center, yells at a referee during the first half of an NCAA college football game against Hawaii in Pasadena, Calif., Saturday, Sept. 9, 2017. (AP Photo/Alex Gallardo)

Head coach Jim Mora said Wednesday the UCLA staff has studied years of games in the Pac-12 and found that the teams with fewer turnovers and more explosive gains win more than 90 percent of the time. Mora added that sacks and red-zone trips are the third and fourth most-significant contributing factors, respectively, according to the program’s research.

So as the Bruins try yet again to snap their losing streak to Stanford, here’s a look at UCLA’s performance against the Cardinal during Mora’s tenure with regard to his four key statistical categories: END_OF_DOCUMENT_TOKEN_TO_BE_REPLACED