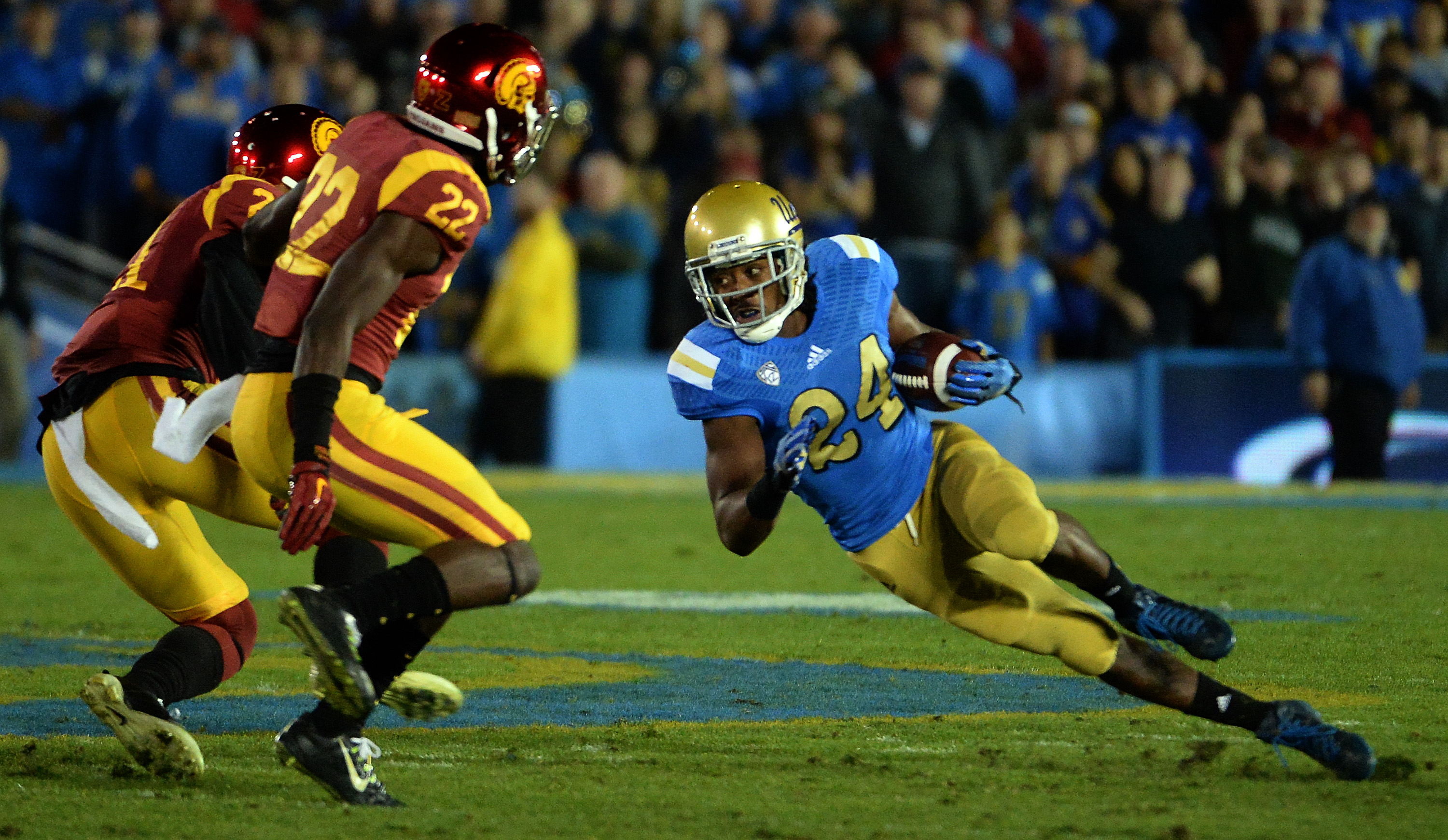 UCLA running back Paul Perkins ran for 93 yards and a touchdown in the Bruins’ 38-20 win over USC last November. (Keith Birmingham/Staff)

Scouting report: A win over UCLA might not guarantee interim coach Clay Helton the full-time job, but a loss likely ends his chances. … USC’s defense is coming off a dreadful performance against Oregon, one in which it allowed six touchdown passes and 16.3 yards per pass attempt. The Trojans are allowing opponents to complete 63.8 percent through the air, the second-worst mark in the Pac-12 (ahead of Oregon State’s 67.9). … USC lost all-conference center Max Tuerk for the season as well as Toa Lobendahn, the versatile sophomore who replaced him. Former four-star recruit Khaliel Rodgers now mans the position, but is playing through a shoulder injury. … Quarterback Cody Kessler isn’t finding the end zone as often as he did last season (39 touchdowns down to 25), but his numbers have otherwise remained steady. … The Trojans rank first in the Pac-12 and No. 13 nationally with a 0.91 turnover margin. However, they are -3 in their four losses.

Series history: USC leads the all-time series, 44-31-7, but UCLA has won the last three games by double digits. Jim Mora can be the first Bruin coach to win four straight since Terry Donahue had five from 1991-95.

For several years at Washington, the knock on Sark was that he could never take a team over that hump. Sure, he’d knock off a few ranked teams here and there, but after a 2009 debut that featured upsets of No. 3 USC and No. 19 Cal, his Huskies finished 7-6 for three straight years. When he finally broke through with an 8-4 record last season, he soon took the Trojans’ top job.

Now back at the school where he spent the bulk of his career as an assistant, the 40-year-old is pushing up against that same hurdle. USC will pull more talent than Sarkisian could ever get at UW, but in his first season, the Trojans seem to have a habit of playing down to opponents. Their losses to Arizona State and Utah required them giving up a Hail Mary and a touchdown with eight seconds left. More recently, they took a 31-2 halftime lead against Cal, only to see the Bears score four of the game’s next five touchdowns. END_OF_DOCUMENT_TOKEN_TO_BE_REPLACED

By now, you’ve read many of the lists that have proliferated in college football’s dry summer months. The best 100 players. The freakiest players. The best coaches, best offseasons, best uniforms.

But this? This is the most important of them all. With Pac-12 Media Days — schedule here — kicking off this morning, I have compiled the five best names from each team in the conference.

A solid quintet that lacks a superstar.

A nice throwback in Hardy Nickerson, bookended by a name that makes me want to re-watch Russell Crowe take on a despotic Joaquin Phoenix. END_OF_DOCUMENT_TOKEN_TO_BE_REPLACED

Key storylines: With conference implications out of the picture, USC and UCLA will be playing almost purely for pride. For coaches on both sides, however, the game will reshape the narrative of their respective seasons. END_OF_DOCUMENT_TOKEN_TO_BE_REPLACED

After missing last year’s USC game with a broken collarbone, receiver Devin Lucien preparing for his first on-field taste of the rivalry. He talked a bit Tuesday about his family’s history with Trojans’ safety Su’a Cravens, as well as a pair of old USC pajamas he had to toss out.