A sprained foot shelved Anigbogu for the only other game he missed the remainder of the season, a March 17 first-round NCAA tournament contest. In other words, he played four months of college basketball without knee issues only for concern to crop up shortly before the NBA draft. END_OF_DOCUMENT_TOKEN_TO_BE_REPLACED

TJ Leaf was lauded for his interview skills as much as anything during the NBA Draft Combine last week. The former UCLA power forward interviewed with 14 teams at the combine and has since worked out with three teams individually.

On Thursday, the projected first-round pick worked out for the Toronto Raptors – the Raptors pick 23rd in the first round – after which he talked about everything from his ability to score on three levels to whether Lonzo Ball would provide him some Big Baller Brand basketball shoes.

Leaf was the life of the party in the UCLA locker room last season, and gave some insight into what a charismatic person he is before stiffening up with the media as the season went along. END_OF_DOCUMENT_TOKEN_TO_BE_REPLACED 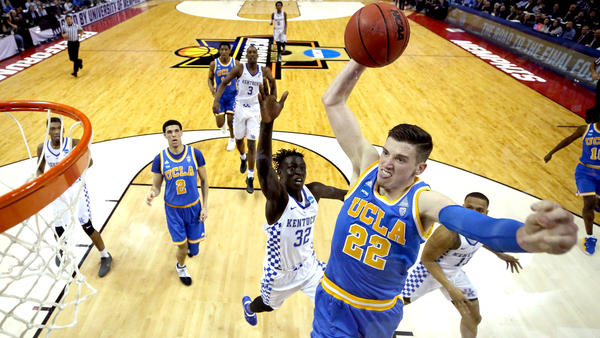 Strengths: TJ Leaf was the best one-on-one player on the highest-scoring team in the country. Coupled with the freshman forward’s ability to run (and stretch) the floor, he was UCLA’s most dynamic offensive weapon. Surrounded by shooters and the best facilitator in college basketball, Leaf was in an ideal situation to succeed. But when he needed to create his own shot, he had abundant success scoring on anyone from anywhere. His 61.7 field goal percentage ranked fourth among all power five conference players and the 6-foot-10 freshman shot 47 percent from 3-point range, making him the best stretch four in college basketball aside from Arizona’s Lauri Markkanen.

Weaknesses: Leaf was plenty athletic and surprisingly physical on the defensive end, but he was very slow to adapt as a help defender. Most of Leaf’s defensive shortcomings were mental. He was slow to rotate, was consistently beaten on back-door cuts and generally had a difficult time keeping his head on a swivel. UCLA’s lack of perimeter defense put an unhealthy amount of pressure on UCLA’s big men, but it also exposed Leaf’s lack of continuity with his teammates on the defensive end.

Best moment: One of Leaf’s best halves of the season maintained UCLA’s elite status at a critical point in the season. END_OF_DOCUMENT_TOKEN_TO_BE_REPLACED