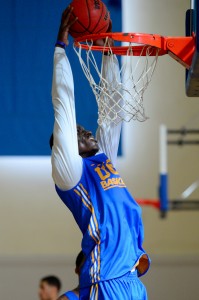 UCLA forward Wanaah Bail has decided to transfer out, a school spokesperson said Friday, ending a stint that saw him make only 24 appearances over two seasons.

Bail had been ruled academically ineligible after the fall quarter, and leaves having totaled just 159 career minutes. The sophomore’s final game was an eight-minute showing during UCLA’s 83-44 loss to Kentucky in Chicago on Dec. 20, one in which he grabbed three rebounds and missed his only shot.

He recorded double-digit minutes five times as a Bruin. The Bahamas native averaged 1.5 points and 2.6 rebounds in 11 games during the 2014-15 season.

UCLA also lost forward Kevon Looney on earlier this week. The freshman officially declared for the NBA draft on Monday, after averaging 11.6 points and leading the team with 9.2 rebounds per game.

UCLA forward Wanaah Bail has been ruled academically ineligible and will sit out the remainder of the season, leaving an already thin Bruins roster with just two frontcourt reserves.

After an injury-riddled freshman year, Bail was averaging 1.5 points and 2.6 rebounds in nine minutes per game. He made 11 appearances as a sophomore, but saw his usage dwindle consistently: after playing a career-high 17 minutes in UCLA’s season opener, Bail’s minutes dropped to 15, 12 and 10 in the next three games.

He never played more than eight after Thanksgiving, and was a healthy scratch in the Bruins’ 87-74 loss to then-No. 9 Gonzaga on Dec. 13. He ended his season by playing eight minutes in an 83-44 blowout loss to No. 1 Kentucky.

There was little to like about Bail’s performance this year. END_OF_DOCUMENT_TOKEN_TO_BE_REPLACED

UCLA forward Wanaah Bail had surgery on his left knee today to remove torn cartilage, likely ending his first season with the Bruins.

The 6-foot-9 freshman only played 60 minutes this season, logging 41 of those in nonconference play. He had surgery to repair cartilage in the same knee last June, and reinjured it on Monday. The former three-star recruit had looked fully recovered after the early portion of the season, and showed impressive athleticism during practices.

Bail is officially ruled out for UCLA’s first weekend in the NCAA tournament, and is questionable to return at all in the postseason. Given how little coach Steve Alford used Bail this season, there is little sense in rushing him back even if the Bruins advance to the Sweet Sixteen.

UCLA forward Wanaah Bail be available for the Bruins’ Thursday game against Nevada, coach Steve Alford said this morning. The freshman had knee surgery in late June, and finally practiced with full contact for the first time last week.

A former three-star prospect in 2012, Bail is an athletic big man who adds depth to the frontcourt and provides another option in UCLA’s transition offense.

Wanaah Bail (left knee injury) and could be back with the Bruins soon. UCLA coach Steve Alford said the forward has been practicing with the team, and that he would discuss the freshman’s status with a doctor after his postgame interview on Sunday night.