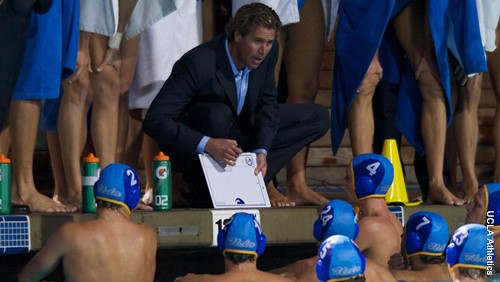 The new UCLA women’s water polo coach is an old face on campus.

Adam Wright, who has coached the men’s water polo team since 2009, will take over the women’s program, the school announced Thursday, becoming the third coach in school history to coach both teams.

“I am extremely honored to serve as the head coach for both UCLA men’s and women’s water polo teams,” Wright said in a statement. “It is an incredible opportunity to coach the most storied program in women’s water polo. The foundation is already in place for both teams, and I am really looking forward to this new challenge.”

The women’s water polo team played in three of the past four NCAA finals, but finished second to Stanford each time. The Bruins lead the country in NCAA women’s water polo championships with seven, but haven’t claimed the title since 2009.

Wright, who won two national championships as a UCLA player, replaces Brandon Brooks, who stepped down in June.

Under Wright, the men’s program won back-to-back NCAA titles in 2014 and 2015 and had a 57-match winning streak, the longest in NCAA history.

Hello, friends! Long time, no blog. You may have noticed I was gone; I went on vacation. But I’ve returned, so here’s a roundup of what went down around UCLA athletics while I was out:

END_OF_DOCUMENT_TOKEN_TO_BE_REPLACED

Stanford has thwarted the UCLA women’s water polo team in the NCAA tournament final twice since 2014. The Bruins hope the third time will be the charm.

After a 14-11 win over Cal in the semifinal Saturday, UCLA will face the Cardinal in the championship game Sunday at 12 p.m. PT in Indianapolis. It’s the third meeting between the MPSF foes in the NCAA final during the past four years. Stanford is making its seventh straight finals appearance and won four of the past six championships.

Stanford edged out USC in the other semifinal. The Bruins already have two wins against the Cardinal this year, including a 6-3 victory in the MPSF tournament final.

UCLA leads the country in women’s water polo NCAA titles with seven, but hasn’t hoisted the trophy since 2009.The championship match will be live streamed on NCAA.com.

UCLA advances to the Sweet 16 with a 4-0 victory over USD!! Staggs with the clinch (again) pic.twitter.com/8UOhKadj3W