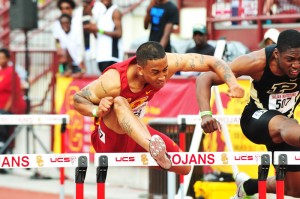 USC senior Aleec Harris set a Pac-12 and West Regionals record today in the 110-meter hurdles at Fayetteville, Ark. Harris’ time of 13.18 broke the long-standing conference record of premier UCLA hurlder Greg Foster (13.22 in 1978). Harris now has the top time in the U.S. and No. 2 time in the world for this year.

On the downside, this will be the first time since 1992 that a Trojan man or woman will not score at the NCAA Championshis in the hammer throw. Here is who qualified for the NCAA championships according to USC: