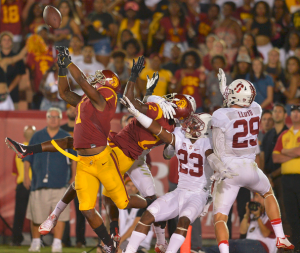 With three losses in 16 games to teams USC was a significant favorite against, is that going to become one of the trademarks of Steve Sarkisian era? Every loss is different but there seems to be a looseness that allows for these types of games.

Not loose as in too calm but loose as in undisciplined. Look at some of the penalties. A team captain commits two penalties? USC’s media guide keeps track of “significant upsets.’ Steve Sarkisian has three of those already. Pete Carroll did not get his first until 2003 (Cal) and suffered his third in 2006.

21 thoughts on “USC Morning Buzz: Is This The Identity Of The Program?”