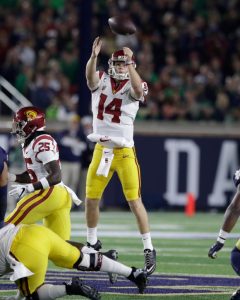 USC’s national-title hopes imploded with a nationally televised self-destruction. So with that small detail in mind, here is the report card from the Notre Dame game.

Sam Darnold completed 20 of 28 passes but what does it matter really with the myriad problems facing the Trojans. He has 10 interceptions this season. But what QB in the nation would be doing a better job in this offense?

Ronald Jones had 12 carries and not much blocking, which is becoming the norm with the offensive line. How about throwing a screen that is not behind the line of scrimmage to get Jones going with his porous blocking. Completely taken out of the game.

This was considered one of the better group efforts of the year, which shows how bad overall the receiving corps is this season. Steven Mitchell caught seven passes but dropped a big deep ball that wasn’t perfect but needs to be caught in a big game. You want to say Tyler Vaughns was the bright spot? Then why was he playing behind Jalen Greene until Greene got hurt?

The receivers are so average that even regular play gets applauded.

There are some freshmen playing but does this excuse that overall the line often looks like it lacks basic fundamentals? There was never a question it would be manhandled by Notre Dame’s defensive line. No holes to run through and Sam Darnold is scrambling for his life throughout the game. Not to mention that first snap of the game.

A former USC player told me he wonders what this group gets taught during the week because they look completely over their heads during games. There was no chance against Notre Dame’s talented left side especially. Rasheem Green couldn’t deal with double teams, mainly because he didn’t look like he was taught any technique.

Cameron Smith is making plays but it often looks like John Houston is just trying to survive, a safety playing linebacker. Uchenna Nwosu and Christian Rector were very quiet, which happens when you finally play a good team.

They could have given up three TD passes to start the game if Notre Dame QB Brandon Wimbush was more accurate. Jack Jones was all over the shop and Iman Marshall left with a knee injury, which meant Isaiah Langley got to give up a TD pass. Have they improved? Has anyone on this team?

Chase McGrath missed a 22-yard field goal. It happens. But the killer was Jack Jones’ fumble on the punt return. What was John Baxter thinking giving Jones his debut at Notre Dame? He couldn’t have broken him in against Oregon State or Utah?

No, let’s break him out in the toughest road environment of the season. That is the hubris that often guides special teams under Baxter.

When does USC not get off to a slow start? When things do not go exactly as planned, when does USC have a Plan B? When does the sideline look organized? The program looks sideways, a shell of the confident group that ended last season with a Rose Bowl victory. When does a player get taken to task for not doing his job? Everyone’s gotten too comfortable after last season’s success and there is no sense of urgency. USC’s lost two games by 35-or-more points in the past 50 years. And the same coaching staff participated in both games.