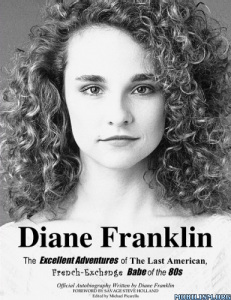 Actress Diane Franklin had it all figured out. She knew from an early age what she wanted to do with her life, thus was able to begin her pursuits even before she started her schooling. Backed by unwavering parental support, and despite being a virtual novice with no connections whatsoever,  Franklin went to work while still a child, first in modeling, then in commercials, inevitably leading to  a busy career appearing in movies and television.

Now in her early 50s, Franklin has written an intimate and reader-friendly autobiography in which the title captures the essence of this actress:  “Diane Franklin – The Excellent Adventures of the Last American, French-Exchange Babe of the 80s.”

The layout of the book, a large paperback, is simple, with no fancy graphics. All of the photos, interspersed throughout the text, are black and white, including the eye-catching cover photo of the actress.

In a unique touch, Franklin “rates” each of the chapters that recall her movie experiences, using the guidelines employed by the MPAA in determining if a movie is for general or adult audiences. This is done by Franklin as a courtesy, as she is candid about her recollections of movies she was in that were geared toward adult viewers. These chapter ratings allow the reader to skip over any content that might cause discomfort.

Franklin recalls that the modeling work she did as a child was superb preparation for an acting career  — going after jobs, the long hours at times,  and the hard work. But she thrived on the demands and was drawn into the exciting world of entertainment.

Her diminutive stature, being only 5 feet, 2 inches, did stymie her modeling work, but she made a smooth transition into commercials. She also accumulated stage experience while in high school and did voice-over work for radio, all of which were valuable  in building her skills as an actress.

Franklin’s first professional stage work was playing Caroline Kirby in “The Happy Journey from Camden to Trention, Caroline being the daughter of the character played by JoBeth Williams.

At age 17 she landed the recurring role of Lois Middleton, a troublemaking teen, in the soap opera “As the World Turns,” which helped her prepare for the demands of an acting career. Thus, when she got her shot at a movie, she put in a memorable performance as Karen in “The Last American Virgin.”

In the book, Franklin details how she approached each role, finding she could play both an “angelic ingénue” or “searing siren.”  Karen in “American Virgin” was vulnerable, but Franklin easily fit into the siren character in the television movie of the week “Summer Girl.” She then proved her versatility with the tragic character of Patricia Montelli in “Amityville II: The Possession,” who starts out as sweet and naïve but ends up devilish, seducing a priest.

While television roles kept her busy, she was always looking for movie work, and in one of her career disappointments, she lost the role of Constanze, Mozart’s wife, to Elizabeth Berridge in the critically acclaimed and award-winning “Amadeus.” However, as events turned out, that setback enabled her to go on and make a name for herself in such movies as “Second Time Lucky” and more notably “Better Off Dead.”

Franklin’s book devotes separate chapters to these characters that have defined her career, analyzing each role along with comments on her working relationships with directors and fellow actors.

She closed down her 1980s experiences by starring as Princess Joanna in “Bill and Ted’s Excellent Adventure.” She makes a pretty good case for calling herself a babe of the 1980s.

The latter chapters of Franklin’s book describe her transition from youthful star to another rewarding role – that of a mother. She  writes about her daughter Olivia, who writes, directs, acts and edits comedic short films. Son Nick composes music and plays the guitar. Diane also has taken on roles in her daughter’s films.

“The Excellent Adventures of the Last American, French-Exchange Babe of the 80s,” is a quick and enjoyable read, written in a personable style that mirrors her rapport with her fans. Also useful is a filmography at the end of the book.

The book can be found at amazon.com.