While the area didn’t produce a draft pick in Thursday’s NFL Draft, here are a few players to keep to eye on in today’s second day (second & third round) and Saturday’s (fourth-seventh round). There are (4) former stars who may be drafted and they’ve been listed in order or their chances of getting drafted, at least according to a couple of scouting services.

Maybe the most prominent athlete is former St. Paul High School and California star running back Nic Grigsby of the University of Arizona. Grigsby, who’s listed at 5-foot-10, 190 pounds on the Wildcats’ official 2010 roster, has added close to 13 pounds of muscle since the close of the season and has been rising up quite a few draft boards.

“I’ve talked to a lot of interested teams,” Grigsby said. “I just got off the phone with the Dolphins and Rams, who might get me off the board early. The Eagles and Colts are also looking at me as a sparkplug.”

Grigsby capped a four-year career at Arizona during which he rushed for 2,957 yards and 28 touchdowns. He was a Pac-10 all-conference selection and a Sporting News honorable mention his freshman year, when he earned a starting spot and finished second on the team in all-purpose yards with 904.

It was Grigsby’s speed at Arizona’s Pro Day on March 15 that really shot him up the draft charts. According to NFLDraftScout.com’s Chad Reuter, Grigsby “put on a show at his workout, running sub 4.4 40’s. That performance could have earned him a draft spot.” 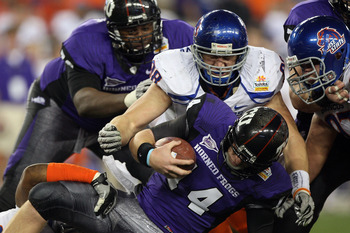 “I’ve been told I’m projected to go in the sixth round or later,” Winterswyk said. “We’ll have to see. I kind of laugh at these guys with their mock drafts. No one really knows what’s going on.”

Winterswyk is spending the weekend in Dana Hills with his brother and said he’s not planning on throwing a bash.

“I’m not really doing much. I’m just hanging out and surfing,” he said. “I’m really just going to take it easy.”

Winterswyk confirmed he’s spoken to 28 NFL teams interested in his services at defensive end and even tight end, a position at which he has little experience.

Winterswyk recently capped a career in which he totaled 167 tackles and 20 sacks and earned numerous awards, including being named a first-team All-WAC player three times and finishing as a finalist for the Burlsworth Award, granted to the nation’s top walk-on.

Arizona offensive lineman Phillip Garcia, a one-time Schurr High and Cerritos College standout, is also eligible for the draft and is projected by the Arizona Republic to either be drafted in the seventh round or become a free agent.

Garcia was a starting right tackle his senior season after playing five games as a backup left tackle his junior year.