BALDWIN PARK – California High School began its boys basketball season with a 52-49 overtime victory against Glendora in the third annual Sierra Vista/Baldwin Park “Winter Tip-Off” Tournament on Tuesday night.The Condors scored two quick baskets to start the overtime period. Robert Amaro scored, then Andrew Barber added a basket off a steal by Ryan Schroll.The Tartans (1-1) battled back to take a 49-48 lead on a 3-pointer by sophomore Brandon Brothers with 2:03 left.

It was the Tartans first lead since midway through the third period.

That was it for Glendora, as Matt Lambrecht hit a 3-pointer with 24 seconds left and Richard Kristl-Givens sank the first of a 1-and-1 free-throw attempt for the final margin.

They then play the winner of the Northview-Claremont game in the first game of bracket play at 7:30 p.m. Thursday. The game will be played at Sierra Vista High School.

The championship game of the tournament will be held Saturday night at 7:30 at Covina High School.

Lambrecht led all scorers with 21 points, including four 3-pointers.

“We had plenty of chances,” Tartans coach Mike LeDuc said. `But we made mistakes when we had chances. We played like it was a really early season game.”

Lambrecht made three consecutive 3-pointers in the second quarter to break open a close game.

MONTEBELLO – It might only have been an early season game, but the Baldwin Park High and Schurr High girls basketball teams battled like it was the postseason Tuesday night.Schurr, behind a game-high 14 points from junior guard Elizabeth Castillo, defeated the visiting Braves 45-39 in a season-opening nonleague game for both teams.Baldwin Park was led by the duo of senior center Tiffany Rojas and junior guard Seriah Escobedo, with 12 and 11 points, respectively.

“This was a good preseason game for us, without a doubt,” Schurr coach Paul Chavez said. “It’s definitely the type of scenario (a tight game) we want to put ourselves in early and see how we fare in terms of taking care of the basketball.”

For the second consecutive year, Schurr beat Baldwin Park, but this year’s result was a much different game.

The Spartans defeated Baldwin Park by 31 points in 2011, but the Braves came out of the gate fast Tuesday and gave Schurr everything it could handle.

Unfortunately for Baldwin Park, it failed to convert at the free-throw line late in the game and that was the difference.

Baldwin Park entered the fourth quarter trailing 33-30, but was only 3 of 13 from the line down the stretch.

“We missed eight in a row (free throws) in the fourth quarter and once we started missing, mentally they shut down,” fourth-year Baldwin Park coach Raquel Viramontes said.

Even La Serna was back at the luncheon for a second consecutive season on Monday when all the teams in all the championship games kicked off the biggest week of the season by dining together at The Grand in Long Beach.

“No it doesn’t get old, this is a great thing,” said Drain, who has been to seven championship luncheons as head coach of the Kares. “The menu is pretty much the same. It’s usually really good. I enjoy it.”

The game marks the second time this season the teams will have played. Mission Prep beat Rio Hondo Prep, 47-14, on Aug. 31 and is favored to deny the Kares their second straight division title and Drain’s fifth overall.

“I think we’ll be a lot better, but they are a really good team,” Drain said. “I think we’re a lot better than we were and we didn’t play very well in that game. We’re looking forward to it.” 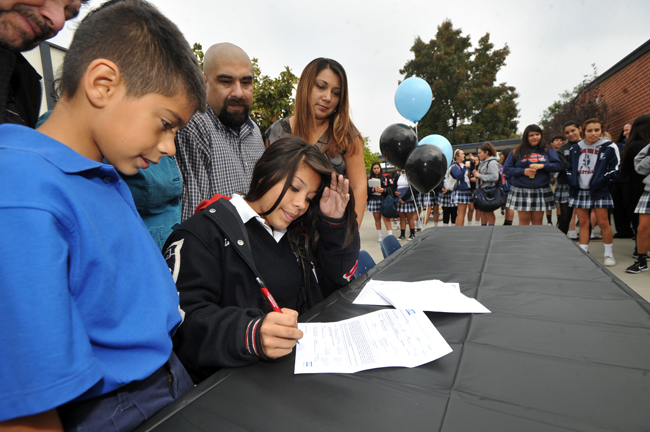 The Condors continued to build upon their already terrific season last Saturday by capturing second place at the CIF State Championships at Woodward Park in Fresno.

They scored 127 points to finish behind first-place Arcadia, which had 53. That strong finish lifted the Condors to the Nike Cross Nationals scheduled for Saturday in Portland, Ore.

Sam Bautista was California’s top performer at the state meet, completing the course in 15 minutes, 35 seconds to take 16th place.

California won the tiebreaker for second place against Carlsbad when Chris Ramirez (71st, 16:09), who was the Condors’ sixth-best performer, finished ahead of Carlsbad’s No. 6 runner Sean Unger (86th, 16:16).