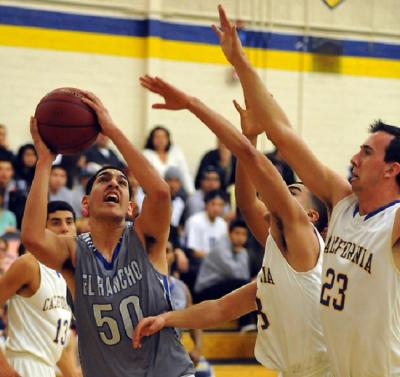 Andrew Garber scored 14 points to pace the Condors (17-6 overall, 5-1 league), who took over sole possession of first place in league.

“It was a big win,” California coach Jason Van Duyne said. “We got Lambrecht some looks early in the game to give us some energy. Our sophomores – Gravitt, Rodriguez and (Traie) Kastl-Givens – did a great job moving the ball offensively and getting us good looks and opportunities to get high-percentage shots, and Andrew Garber did a great job defensively for us, and really helped dictate the tempo in transition.”

First place in the Del Rio League’s boys basketball standings is at stake when El Rancho visits California at 7 p.m. tonight.  Both teams are 4-1 in league play. 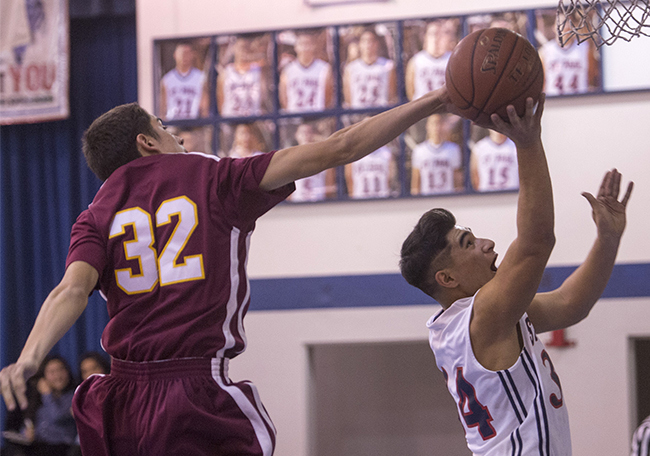 Josiah Corona scored 18 points to lead the host Swordsmen, who won by going on a game-ending 18-9 run.

“The thing about league is that you don’t win it in the middle of January. You win it at the end,” St. Paul assistant coach Jerome Orbita said. “We still have five games left. We have a tough game against St. Monica next. We’re only worried about that right now.

“We were really happy with our defensive effort.”

After a jumper by Cantwell’s Antonio Cortez gave the visiting Cardinals a 39-35 lead in the early stages of the fourth quarter, the Swordsmen responded with their winning surge.

Andrew Garcia started the St. Paul rally with a successful jumper that started a 10-0 run.

Henry Llera played a key role for the Swordsmen, scoring seven points in the fourth quarter. He finished with 12 points.

Perez, who led all scorers and helped the Oilers take an 8-0 first-quarter lead, scored four of her six goals in the quarter.

Her third goal of the quarter was a nice turnaround shot from the hole position to give Montebello a 6-0 lead with 1:28 left. She scored on a breakaway just 36 seconds later.

Montebello improved to 2-0 in league while Schurr fell to 1-2 in league and 13-7 overall.

Schurr was led by sophomore utility player Jolene Viramontes, who scored all five of the Spartans’ goals. Viramontes has 55 goals in 19 games.

The Oilers kept up the pressure and scored six goals in the second quarter, including two each from Jimenez and Ramirez and a pair from junior Brianna Toledo.

LA HABRA – Maranatha High fell behind early but regrouped with a strong defense that lifted the Minutemen to a 46-41 Olympic League boys basketball victory at Whittier Christian on Tuesday.

After the Heralds took a 24-20 lead at halftime, the visiting Minutemen regained control by holding Whittier Christian scoreless in the third quarter for a 29-24 lead entering the fourth quarter.

Jeremy Major scored a game-high 14 points to lead the Minutemen (17-5 overall, 3-1 league), who improved their position in the Olympic League standings.

“We started out really good,” Major said. “Our depth was a little low. Some of our young guys came in and they fought hard. We played as a team and we made the right decisions at the right time.”

Caylan Swinnie also played a key role for the Minutemen in scoring 13 points.

Major started Maranatha’s third-quarter run with a three-point play. The Minutemen then took a 25-24 on Michael DeMeester’s jumper.

The Heralds, however, recovered from their scoreless third quarter when Esslinger’s jumper gave Whittier Christian a 34-32 lead.

Swinnie quickly put the Minutemen back out in front to stay when his 3-pointer gave Maranatha a 35-34 advantage.