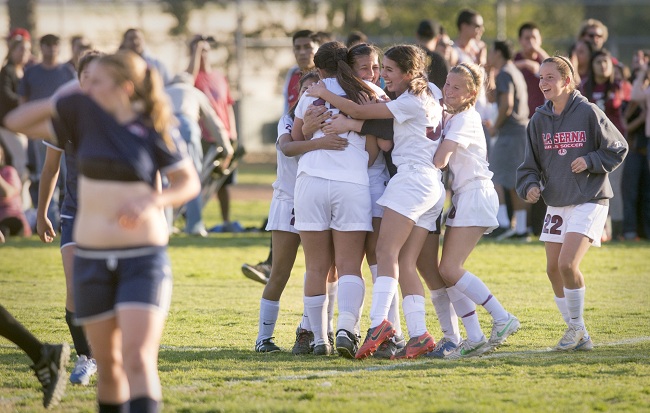 WHITTIER – La Serna High faced adversity in Tuesday’s CIF-Southern Section Division 5 girls soccer semifinals, but it came through when it mattered most.

After surrendering a two-goal lead to visiting La Quinta in the second half, La Serna regrouped and retook the lead when Moriah Earley scored her second goal of the game in the 58th minute.

Thanks to a strong Lancers defense, Earley’s goal turned out to be the difference in La Serna’s 3-2 victory.

The Lancers are headed to their second consecutive division championship game. La Serna, which improved to 22-4-3, will play either Friday or Saturday against Cabrillo of Lompoc. The Lancers lost last year’s final to Downey, 2-1 in overtime.

La Quinta, which finished the season 20-5-4, rallied after trailing 2-0 at halftime.

The Blackhawks started their rally when Brenda Barriga scored on a penalty kick during the 45th minute.

Brielle Leon then deadlocked the contest when she scored nine minutes later. Leon’s goal was set up by a corner kick.

El Rancho is headed to the CIF-Southern Section Division 3 boys soccer championship game after its dramatic 3-2 overtime victory over Century in the semifinals.  It will mark the Dons’ third consecutive final-round appearance.
La Serna is also championship game-bound after its 3-2 win over La Quinta in the Division 5 girls soccer semifinals. La Mirada, however, saw its season end with a 3-0 loss to Downey in the Division 4 girls soccer semifinals.

According to La Habra High School wrestling coach Dwayne DeNolf, Michael Rangel is pulling out of this weekend’s CIF State Tournament in Bakersfield.  Rangel, the Highlanders’ 106-pounder, is withdrawing from the event because of an elbow injury.  Rangel qualified for the state tournament by finishing ninth at last weekend’s CIF-Southern Section Masters Meet at Temecula Valley High School.  Rangel was the Whittier area’s only wrestler to qualify for the state tournament.

El Rancho, coming off a 5-0 quarterfinal win Friday over La Sierra, has outscored its opponents 16-1 in its three postseason matches.

With a win today, the top-seeded Dons would advance to their third consecutive division championship game. El Rancho captured a division crown in 2011 but lost in the final last year.

Dons coach Dominic Picon hopes the best is yet to come for this year’s squad.

“Our kids are excited,” Picon said. “They are playing well. Hopefully, we are ready.

“We have had an up-and-down season. I think we’re starting to peak at the right time.”

The Centurions, who took second place in the Orange League with a 7-3 record, are led by forward Ronaldo Pineda, who scored four goals in a 4-2 quarterfinal triumph over Oxnard. Pineda has scored a school-record 24 goals this season.

La Mirada reached the Division 4 semifinals with a 2-1 win over Riverside Poly. 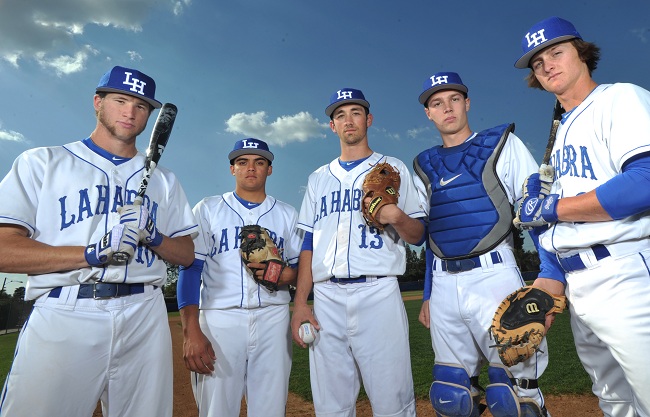 La Habra High School, thanks to the return of several key players, has high hopes for the 2013 baseball season.

The defending Freeway League champion Highlanders, who finished 17-11 overall last year and advanced to the second round of the CIF-Southern Section Division 4 playoffs, are looking to go even farther this season.

La Habra, which finished 12-3 in league, will feature a new face in the dugout as coach John Sothern takes over for Paul Caffrey.

“Personally, it’s exciting for me because it’s my first full-time opportunity for me as a varsity coach,” Sothern said.

“It’s tough for guys who were part of a system the last three years and suddenly with a new coaching staff coming in, they have to adjust to a new system.

“The guys are doing a great job assimilating into the system. We’re getting good results from our new hitting, pitching and fielding philosophies.”

Sparling, who posted a 1-1 record and a 2.82 ERA in 27.1 innings last season, figures to take over the primary pitching duties.