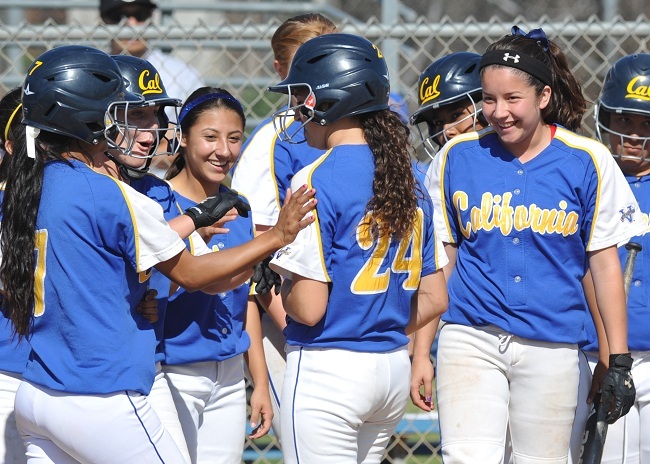 Trujillo hit a three-run home run and pitched four hitless innings to spark the Condors to a 11-0 nonleague five-inning softball victory over visiting Bell Gardens. The game was called because of a mercy rule.

It was the fourth consecutive win for California, now 8-3.

Eight players had at least one hit for the Condors, who had 12 hits. Junior outfielder and leadoff hitter Rachel Shumaker had three hits, including an RBI triple.

Trujillo and Mariah Salazar combined for a one-hitter. Trujillo, who earned the victory, struck out six in four innings. Salazar pitched a scoreless fifth.

Bell Gardens, which made four errors, fell to 1-5.

Thursday’s contest marked California’s first game back home since its appearance at the 18th annual Tournament of Champions at Bullhead City, Ariz., which ended Saturday. The Condors posted a 3-2 record at the event.

“It was kind of a break from where we have been,” California coach Jim Kruse said. “We had some tough games. We played Mater Dei and lost 2-0. We played Chino Hills and lost 9-3. We had a hard week, so it’s a nice break to get a victory like this.

“Trisha pitched really well and our hitting is starting to come around. We got to keep getting better because we know our league (Del Rio) is tough. We’re working on improving every day. We’re not satisfied with where we are at.

“We played as a team. As with every game, we look to get better.”

It was Trujillo who jump-started the Condors when she hit her three-run home run in the bottom of the first inning. Shumaker, who reached on an error, and Rayleen Pallan, who walked, set the stage for Trujillo.

The Condors added a run in the third when Pallan, who doubled earlier in the inning, scored on Lorren Sharp’s infield single.

California then put the game out of reach with five runs in the fourth inning. After Lancers starting pitcher Destiny Leon retired the first two batters, the Condors had six consecutive hits, including Shumaker’s run-scoring triple and Joslyn Macias’ two-run double.

The Condors secured the win with a two-run fifth.

California next will host Valley Christian in a nonleague game scheduled for Thursday.

“We’re just going to come out hard and hopefully get another win,” Trujillo said.