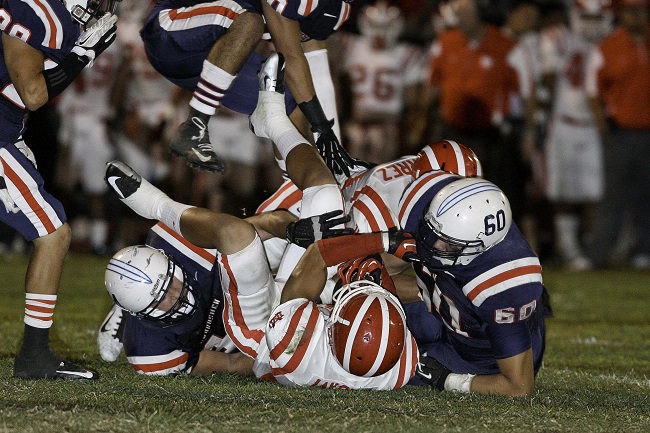 St. Paul players bring down a Mater Dei runner during a game last season at St. Paul, where the field will be replaced by a new synthetic turf in time for the upcoming season. (Christopher Burt / Correspondent)

The Swordsmen will be getting new synthetic turf, along with an all-weather track, for the 2013 season.

Since the field is scheduled to be excavated in April, St. Paul will host a “Final Field Walk” from 11 a.m. to 3 p.m. on Saturday.

The event, a fundraiser for the football program, will feature food and music. Keepsakes of the field will be available for purchase.

The public is welcome. All former football and soccer players, along with band, drill team and pep squad members, are invited as well.

“It’s going to be a get together of people who have performed on the field,” said Mike Duarte, who is an assistant football coach at St. Paul. “It’s going to be a fun event. It’s a very close community at the school and the student-athletes have a lot of special memories because of that closeness.

“It will be a celebration.”

The field walk is scheduled for 11 a.m., followed by music and photo opportunities.

El Rancho, which captured last year’s league crown by posting a 10-0 record, will open its title defense with a home match against Whittier, which is looking to rebound from a 1-9 league finish. The Dons advanced to the second round of last year’s CIF-Southern Section Division 5 playoffs, where they lost to South El Monte 11-7.

La Serna will visit Santa Fe in a tilt that features two teams tied for second place by going 7-3. The Lancers, who are ranked No. 3 in the latest Division 5 poll, won their first three postseason matches before losing to Arroyo 11-7 in last season’s quarterfinals.

Santa Fe lost to Whittier Christian 11-7 in the Division 5 wild-card round.

California, which recorded a fourth-best Del Rio mark of 4-6, will travel to Pioneer, which went 1-9.

All matches are scheduled to start at 3:15 p.m.

The Cardinals (3-6), who play a Thursday doubleheader at Gahr, continue their tournament run Saturday with a 4:45 p.m. quarterfinal game against Villa Park at East Los Angeles College. If Whittier wins, it will advance to the semifinals at 6:30 p.m. against either La Salle or Segerstrom.

Montebello and Cantwell Sacred Heart will play consolation matches on Saturday. Montebello will play Bellflower and Channel Islands at 8 a.m. and 11:30 a.m., respectively, at Bellflower.

Cantwell will host Taft at 9:45 a.m. If the Cardinals win, they will advance to the ninth-place game scheduled for 1:15 p.m. against Bell or Mayfair.