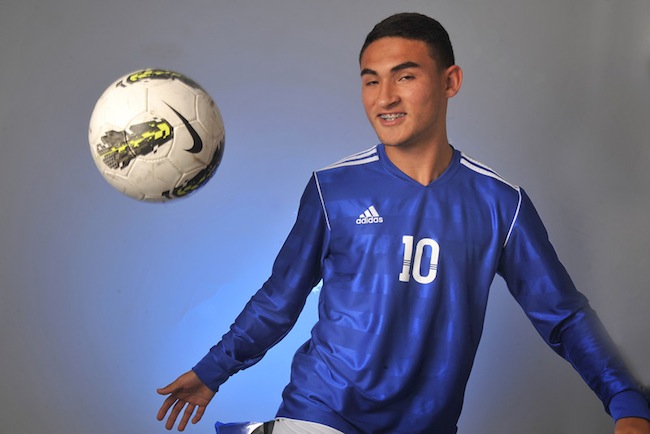 Cristian Roldan saved the best for last as he finished his El Rancho soccer career on quite the high note.

The Dons’ top player scored 54 goals and delivered 30 assists as he helped lead El Rancho to both the CIF-Southern Section Division 3 and CIF-State Division I Southern California Regional championships.

Roldan, a senior forward, collected his share of awards, which included All-CIF Division 3 most valuable player honors and the Del Rio League’s MVP.

For playing a central role in El Rancho’s historic season, Roldan was named the Daily News Boys Soccer Player of the Year.

“It’s just a great feeling,” Roldan said as he looked back on the 2012-13 season. “We pulled it together in the end and we came out on top. Overall, it was a long season full of ups and downs. But like I said, the last games count the most and we were undefeated come playoff time.”

Roldan, who also won last year’s Daily News Player of the Year award, will soon take his game to the Pacific Northwest as he recently signed with the University of Washington.

“Once I got there, the vibe was nothing like I never felt before,” Roldan said of his decision to choose Washington. “I just felt at home once I visited the campus and played with the guys. The offer was great. The coaching staff is the best out there. The city of Seattle is a soccer city.”

Perhaps Roldan’s greatest highlight of the season came in El Rancho’s 3-2 overtime triumph over Century in the semifinals of the CIF-SS Division 3 playoffs. Roldan scored all three goals with his third coming in sudden-death overtime.

Roldan also scored a goal in the Dons’ 7-0 victory over Ontario in the semifinals of the CIF-State Division I Southern California Regionals.

“Overall, it was a successful season,” said Roldan, a four-year varsity player. “We made history at our school. It’s just remarkable and I will never forget that.”

Picon guided the Dons to a history-making season as they captured their first CIF-State Division I Southern California Regional championship, which came after they earned the CIF-Southern Section Division 3 title.

El Rancho, which finished the season with a 29-2-1 overall record and the Del Rio League championship, took home the regional crown by defeating top-seeded San Clemente 3-0. The victory also marked sweet payback for the Dons, who fell to San Clemente 2-0 in the first round of the 2011 regional tournament.

For his efforts, Picon was named the Daily News Boys Soccer Coach of the Year. He also won the award last year.

Picon, who also was named the All-CIF Division 3 coach of the year, also coached the Dons to their second CIF-SS divisional title in three years. El Rancho won the Division 3 crown by defeating Channel Islands 3-2. 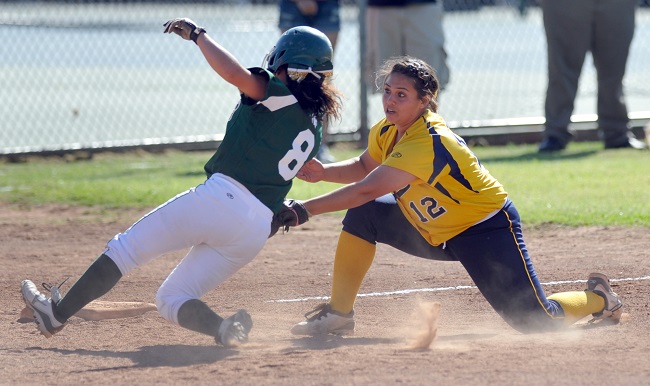 MONTEBELLO – After sharing the Almont League softball crown last year, both Montebello and Schurr are seeking to reach the top once again this season.

And with both teams entering Thursday’s game with 3-0 league records, the season’s first meeting between the crosstown rivals could go a long way in determining the Almont race.

The host Oilers, led by a balanced 13-hit attack, took the upper hand by defeating Schurr 10-8 in a game that featured four lead changes.

Senior first baseman-outfielder Stephanie Quintero helped Montebello’s attack with three hits, including a triple, and three RBIs. Quintero was one of five Oilers who had a multi-hit effort.

“It’s always intense,” Oilers coach Laurie Capps said of her team’s meetings against the Spartans. “It’s kind of like USC and UCLA – it doesn’t matter who is having a good year or a bad year. It’s always intense. And since we both came in with equal records, it made it even more fun and intense.

“Everybody contributed. It was a total team effort and it’s a good win.”

Senior shortstop Emily Sanchez was the offensive leader for the Spartans (6-12, 3-1), who had 15 hits. Sanchez had four hits and drove in four runs.

“We’re not finished with the first round of league play,” Schurr coach Jackie Montanez said. “It’s just another game in our league season. Both teams came ready to hit. The girls put up a fight and came out in the losing end – that’s just the nature of the game. There are things we need to work on. We’re going to take one game at a time to get better in league.”

Montebello scored the decisive runs in the bottom of the sixth. Back-to-back base hits by junior first baseman Alyssa Soneff and junior shortstop Andrea Rocha set things up for Quintero, who gave the Oilers the lead for good when she delivered a run-scoring single to center.

Schurr tied it at 8-8 in the top of the sixth, which featured Sanchez’s two-run single to right that scored Karen Roman and Alexis Lazaro.

After the Oilers took a 1-0 lead in the first, the Spartans responded by scoring three runs in the second. The Spartans produced five consecutive base hits, which included run-scoring singles by Stephanie Guido, Lazaro and Sanchez.

Montebello quickly regained the lead, 5-3, after three innings. The Oilers scored twice in both the second and third. Brianna Alvarez’s run-scoring single and Evelyn Hernandez’s RBI groundout tied the score 3-3.

Quintero then gave the Oilers the lead when she blasted a two-run triple during the third.

Only one run was scored as both pitchers took different paths for the final result.

Santa Fe senior right-hander Brittany Gonzalez allowed one hit in a 1-0 loss at El Rancho while sophomore Jackie De Loza (six strikeouts) allowed base runners in every inning but the seventh for the victory.

“It was an amazing game with my pitcher Jackie,” El Rancho coach A.J. Reyes said. “She worked, hit her spots, she was unbelievable (Thursday).

“Their pitcher (Gonzalez) did a great job keeping us off-balance.”

The Dons, who remained a game behind league-leading La Serna, won it in the bottom of the seventh when pinch-runner Jazmine Sanchez scored after a grounder to short by freshman Janessa Lozano, who had the Dons’ only hit.

Sanchez, who was injured on the play when she slid under the tag by the Santa Fe catcher, was carried off the field by Reyes.

Dons junior catcher Aiyana Leal-Robles opened the inning with a grounder to Santa Fe third baseman Alexxis Ponce, who bobbled the ball and threw wide to first to allow the runner to advance to second.

Ponce then just missed a short pop-up by shortstop Destiny Cervantes in foul territory. Cervantes then sacrificed Sanchez to third to set up the winning run.

“Like my coach said, `Who is going to jump on that grenade?’ And I felt I should jump on it and help my team out for that winning run,” Sanchez said.

The Chiefs loaded the bases in the sixth inning with one out.

Junior right fielder Jillian Saiza (1 for 2) opened the inning with a walk, followed by a throwing error that allowed both runners to advance to second and third.

“My main goal was just to hit my spots as much as I could and execute in the situation that I was in,” said De Loza, who improved to 4-3.

Since we’re in the middle of the prep baseball season, it’s time to start thinking about which Whittier-area players are the best candidates for player-of-the-year honors.  So who do you think are the best baseball players in the area?  I would like to hear from you.

Here is the area softball schedule for Thursday, April 18: