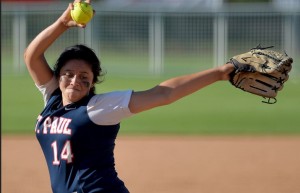 Boy, did I get THAT wrong!
My prediction of a 6-4 La Serna victory over St. Paul in the CIF-SS Division 3 softball final wasn’t even remotely close. I went 3 for 3, missing the score, the run total and the winning team.
I gave the Lancers the edge when it came to pitching, but St. Paul’s Koreen Orozco was clearly the best player on the field Friday. She held La Serna to two hits – one in the first inning, one in the seventh – and induced 17 ground ball outs, which was supposed to be the strength of La Serna’s Jamie Wren.
The advantage clearly went to the Swordsmen.
On defense, only one error was committed in the game – by St. Paul – and it led to La Serna’s only run of the game. But a pair of La Serna miscues that weren’t officially errors led to both St. Paul runs as well. An outfield misread led to Krystal Gutierrez’s RBI double in the first inning, and Myranda Bueno singled off Wren’s glove in the fourth when the pitcher dove for a pop fly that would have spun into foul ground had she left it alone. That let Bryanna Campos get to third base with no outs, and she scored one batter later on a sacrifice fly by Niko Walker.
Again, advantage to St. Paul.
The Swordsmen also did a better job running the bases Friday, but only because La Serna had so few chances. The Lancers had just six runners reach base, and only two got past second base.
Offensively, the edge clearly went to St. Paul. The Swordsmen totaled nine hits – at least one each time they came to the plate – and pounded three doubles off Wren.
As far as intangibles go, St. Paul played with more passion, perhaps because it hadn’t claimed a CIF softball title since 1988, about 10 years before most of its players were even born. They were determined to even the season series with La Serna at two victories apiece, including the most important one.