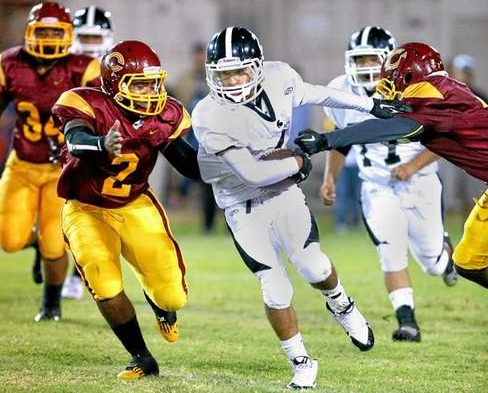 DAILY TOP 10 FOOTBALL RANKINGS
1. La Mirada (4-1) — Can the Matadores run the table? The answer could be yes. La Mirada should get a test from Bellflower on Friday, but their next test might not be until championship week.
2. La Serna (4-1) — The Lancers, despite winning their past three games, have flown under the radar. But this team looks more than capable of winning another CIF-SS title.
3. La Habra (2-3) — The Highlanders are the prohibitive favorite in the Freeway League. But you have to wonder about their defense and when it will cost them again.
4. California (3-2) — The Condors might be La Serna’s chief challenger in the Del Rio. They followed up an impressive victory over San Marino two weeks ago with a blow-out win over Magnolia last week.
5. El Rancho (2-2) — Its been hit and miss for the Dons, who at times look to be a big challenger in the Del Rio. But first they must find some consistency.
6. St. Paul (3-2) — The Swordsmen are looking like pretenders with every passing week. After opening with three blow-out wins, St. Paul has been outscored, 96-0, over the past two weeks against elite competition. Where they fit will be more known next week when they travel to La Salle.
7. Whittier (2-2) — The Cards might do some damage in the Del Rio. We’ll find out how much when they face Schurr this week.
8. Cantwell (3-1) — The Cards, after a couple of down years, might be back in the fold. They look like the favorite in the South Catholic League.
9. Schurr (1-3) — The Spartans, with so many teams in the Almont on down years, might be the league favorite. We should get a good barometer reading against Whittier on Friday.
10. Santa Fe (1-4) — Don’t sleep on the Chiefs, who despite their record, should challenge in the Del Rio.