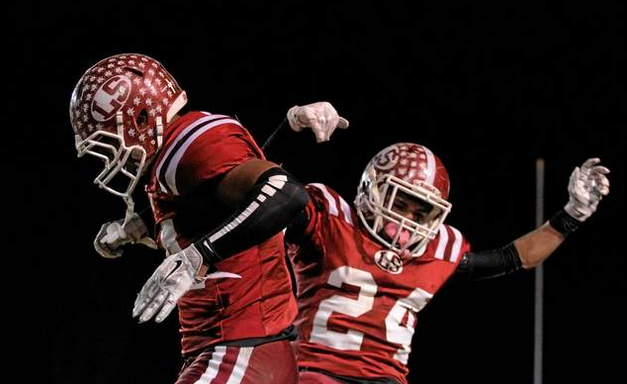 Anthony Garcia (24) of the La Serna Lancers celebrates with a teammate after scoring a touchdown during Friday’s CIF football playoff game against the St. Francis Golden Knights at Cal High School. (Photo by Robert Huskey for Whittier Daily News)

WHITTIER — La Serna High School may have finished second in the Del Rio League and wasn’t considered one of the favorites for the CIF-SS Southeast Division football championship, but the Lancers, who won it last season, believe the title is theirs until someone takes it away from them.
They continued to live by that motto on Friday.
Enrique Pacheco threw for 112 yards and two scores, including the game-winner in the fourth quarter, and La Serna advanced to the division semifinals for the fifth consecutive season with a 38-35 victory over top seed St. Francis at California High School.
Anthony Garcia rushed for 143 yards and a touchdown and Ruben Rios had 77 and a score for the Lancers, who improved to 10-2 and will travel to Crescenta Valley for next week’s semifinals.
Miles Bryant, in place of injured Jeremiah Martin, threw for 267 yards and four touchdowns, and Dylan Crawford had five receptions for 136 yards for St. Francis, which finished 11-1.

— Stephen Ramirez
NORTHVIEW 42, MONTEBELLO 24
MONTEBELLO >> It’s been 26 years since Northview last appeared in a CIF-Southern Section semifinal game.
It’s now official. Northview started slowly but turned on the offense in the second quarter and defeated host Montebello, 42-24, in a Mid Valley Division quarterfinal game.
The Vikings, who defeated Montebello for the second time this season, won their seventh in a row and improved to 11-1. Montebello ended its season at 7-5.
The Vikings, who last won a CIF title in 1987, were led by running backs Alex Camacho and Elijah Grijalva with two touchdowns each.
— John Sherrard
NEXT WEEK’S SCHEDULE
SOUTHEAST DIVISION
SEMIFINALS
Friday
La Serna vs. Crescenta Vally, site TBA, 7:30 p.m. 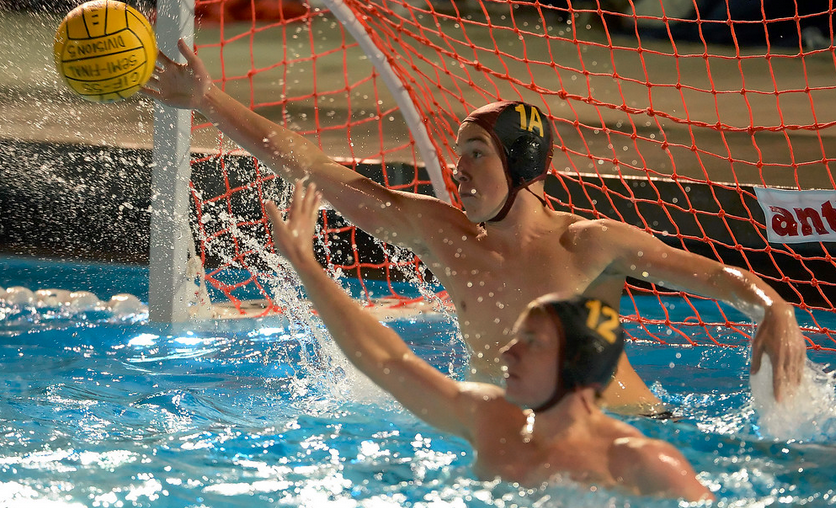 DIAMOND BAR — All the Los Altos High School boys water polo team, after losing in the CIF-Southern Section finals last season, was a second chance.
The Conquerors will get it.
Justin Contreras scored six goals and George Millard had five to lead Los Altos to a 16-11 victory over La Serna in a Division 5 semifinal at Diamond Bar High School.
Guillermo Ocasio had three goals for Los Altos, which improved to 21-8 and will face either Claremont in Saturday’s final at William Woollett Aquatic Center in Irvine. The time will be announced Thursday morning. The Conquerors lost to Glendale in last season’s title game.
George Mooney had three goals for La Serna, which finished 20-12. The Lancers also got two goals each from Perry Louwers, Elias Acosta and Steven Marcy.
The key moment came early in the fourth quarter when it used back-to-back turnovers to score three consecutive goals for a 13-9 advantage. Contreras followed with two back-hand shots to push it to 15-10.
Los Altos’ Justin Contreras: “I said in the beginning of the year we’re going back to the finals to get that ring. I mean it. I really wanted to get back to the finals. It’s my senior year, and I’m going out with a bang.”
Los Altos co-coach Bobby Contreras: “I told the kids before the game that we’re going to make mistakes. But its what we do to fix the mistake. Getting down 3-0, it was a mistake. As long as we kept making the effort to correct the mistake, we were going to be OK. I thought the boys played a very good defensive game against (La Serna’s) attackers.”
La Serna coach Jim Armstrong: “We knew that even though we beat than twice this year we were going to see a different energy out of them tonight. We saw it. Sad part, from our perspective, is that we had them down 3-0, and, after falling behind, came back to lead 7-6 and had momentum. But we had some untimely mistakes and bad passes and they took advantage.”

Balsa Dragovic and Gligorije Rakocevi were two keys to the Cantwell boys basketball team earning a spot in the open division last season, and they were rewarded for that success Wednesday, each signing Division I scholarship letters.
Dragovic signed with Harvard, with Rakocevi inking with Oregon State.
Here is the video of their signing day:

By Stephen Ramirez
THOUSAND OAKS >> La Reina High School won its only CIF-Southern Section girls volleyball title in 2000.
The Regents will get a chance on Saturday to add to that.
Carolena Huseby had 17 kills to lead La Reina to a 25-22, 28-26, 25-27, 25-21 victory over visiting St. Paul in a Division 4AA semifinal match on Tuesday.
Alexandra Polk also had nine kills for the Regents, who improved to 29-8 and will face Alta Loma in the finals, either Friday or Saturday at either Cerritos College or Fullerton College. The site, venue and time will be announced by the CIF office on Wednesday.
Riley Kelly had 17 kills for the Swordsmen, who slipped to 30-7. St. Paul is still eligible for an at-large selection to the state playoffs. Those brackets will be announced on Sunday.