By Stephen Ramirez
WHITTIER — They don’t give out league or divisional boys basketball championships in December, but if they did, Wilson High School might be on the top of the list. 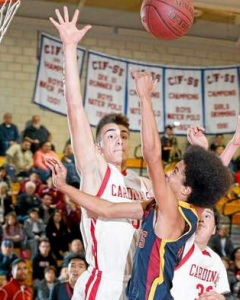 No area team appears to be playing better than the Wildcats in December.
Justin Chan scored 21 points and Kyle Price had 14 as Wilson won its second tournament of the month with a 55-50 victory over host Whittier to claim the fifth Whittier Holiday Tournament at the Bob Chandler Sports Complex.
Jared Kawamoto also had seven points and eight rebounds for Wilson, which improved to 13-2. Dominic Saldana had 21 points and Anthony Rios 12 for Whittier, which slipped to 11-2.
Wilson coach Willie Allen: “The boys have been playing very well. They’ve been exceeding our expectations and rising to the challenge. We’ve played some good teams, and when the pressure is there, they make big plays.”