By Chris Trevino
LONG BEACH >> The question posed to La Mirada head coach Bryce Jones was in all likelihood a question he was happy to answer: is La Mirada a basketball school now?
“La Mirada is an athletic school,” said Jones with a smile.
It was an inevitable question to pose after Jones and La Mirada made program history Saturday afternoon at the Walter Pyramid. The Matadores claimed the CIF State Division II Regional championship with a stellar defensive performance in 49-40 win over No. 4 seed Lawndale, led by a double-double from Vittorio Reynoso-Avila with 14 points and 13 rebounds.
“This is a great feeling. A year of firsts for us. Winning 30 games, getting this far,” said Jones. “Just doing things that haven’t been done yet at this school is really exciting and it’s a credit to these guys next to me and the guys in the locker room.”

Boys golf
St. Paul 243, Mary Star 263 — Jason Gras shot a 46, Steven Huezo shot a 48 and Brandon Baucom shot a 49 at Harbor Park Golf Course for the Swordsmen (4-3) in a nonleague victory. Adrian Peralta and Jesse Saragosa each shot a 53 for St. Paul.
Whittier Christian 213, Gahr 220 — Karsten Briley and Brian Rafter each shot a 40 at the La Mirada Golf Course par 35 to lead the Heralds (4-1) to the nonleague win. Matt Rafter shot a 42 for Whittier Christian.

By Stephen Ramirez
NORWALK — Mt. San Antonio College waited a year for a chance to get back to the California Community College Athletic Association women’s basketball title game.
The wait for state championship No. 7 will be a little longer.
Michelle Townsend hit a 3-pointer with 57 seconds left and Chabot, of Hayward, upset top the No. 1 Mounties, 63-58, in the CCCAA title game Sunday at Cerritos College.
Morgan Green scored 26 points and Townsend had 15 for the Gladiators, who finished 31-3 and won their first state championship. 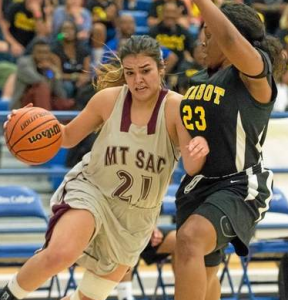 Priscilla Lopez had 14 points and Sashanique Youngblood 13 for Mt. SAC, which finished 34-1. The Mounties lost in the title game last season.

“It’s tough, it’s tough,” Mt. SAC coach Brian Crichlow said. “I know myself and the young ladies, we’re all hurting. We set goals at the beginning of the year and we were able to set all of them, except this one. But it doesn’t diminish the fact they were 34-1 and they played hard every game.
“It’s a little disappointing, but it’s life. Somebody has to win and somebody has to lose. Unfortunately, we came up on the wrong end.”
It seemed to be there for the taking for Mt. SAC, which used an 18-5 blitz for a 32-28 lead at halftime. But the Mounties couldn’t shake Chabot, which got a 3-pointer from Green and two inside shots from Alana Simon (17 points) to draw even at 58 with 1:35 to play.
Townsend then hit a 3-pointer for a 61-58 lead before Lopez and Youngblood missed 3-pointers with 30 seconds left and Lopez was long on a short jumper in the final seconds.
“Not being able to hit shots down the stretch hurt us,” Crichlow said. “We made some mistakes late, and it hurt us. It’s a tough way to go out this way when you fought so hard to get here.”

MEN
SADDLEBACK 50, EAST L.A. 47 —The Huskies, after an incredible run from No. 13 seed to the title game, finally ran out of magical moments.
Conor Clifford scored 16 points and the Gauchos (32-2) closed with a 10-2 run to secure their third CCCAA title since 2002 and deny the Huskies their first.
Marquis Salmon had 15 points for East Los Angeles, which finished 23-10. The Huskies had a chance to tie it late. But Te’Shon Burton missed a 3-pointer with five seconds left and Saddleback’s Dusty Baker intercepted a pass at the buzzer.

“We just didn’t execute down the stretch,” East L.A coach John Mosley said. “It was a little loud,a little noisy. We didn’t get a good possession at the end. But I’m proud of these guys and what they’ve accomplished.”