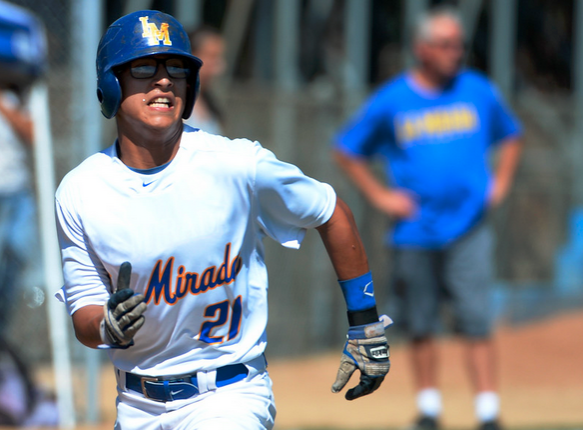 LA MIRADA — La Mirada High School’s slow start to the baseball season is now a distant memory.
The Matadores continued their recent surge with a 10-4 victory over visiting Norwalk in a Suburban League game on Wednesday.
Ethan Lopez had three RBIs and Omar Myzel had three hits for La Mirada, which improved to 14-11 overall and 6-1 in league play. Norwalk slipped to 6-11 and 2-7.
The win was the Matadores’ 11th in their past 14 games. They began the year 3-8, playing arguably the toughest schedule in the area.
The Matadores were in a good spot on Wednesday, taking a 9-0 lead after three innings. La Mirada, helped by two Viking errors, scored four runs in the second. Myzel and Jakob Gonzalez, who each had singles, scored on back-to-back miscues before Matthew Hickman and Lopez followed with RBI singles for a 4-0 lead.
Hickman had a RBI single and Lopez a two-run double to highlight a five-run third for a 9-0 lead.
Starting pitcher Shawn Dumser carried a no-hitter into the fifth before giving up four runs. He finished with three strike outs.

La Mirada coach Jimmy Zurn: “(The schedule) did harden us. We were playing the likes of (Long Beach) Wilson, Lakewood, El Dorado, Villa Park; all having phenomenal seasons. We battled, we won a couple of them, we lost a couple. Our kids showed we could play with anybody. If we do the right things, we’re going to be in a good spot come playoff time.”

La Mirada’s Ethan Lopez: “As long as we play our game,” we’re a tough team to beat.”