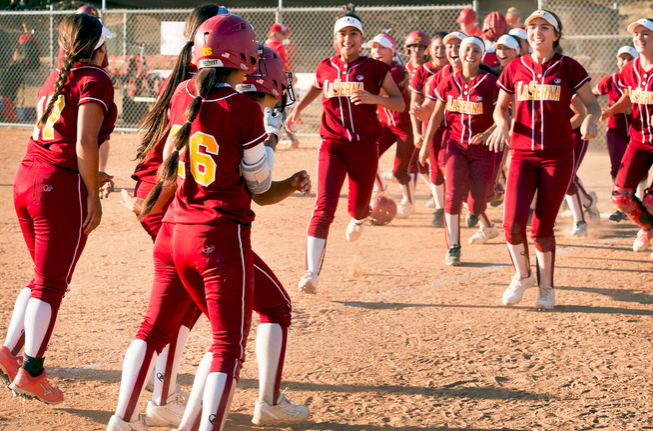 La Serna High players jubilate after their win over Redondo High in the bottom of the 12th inning at La Serna’s Whittier, Calif. campus field May 28, 2015. (Photo by Leo Jarzomb/Whittier Daily News)

WHITTIER — La Serna High School’s quest for softball redemption will take the Lancers into next week.Vanessa Ayala singled home pinch-runner Jocelyn Cebedo in the bottom of the 12th inning and the Lancers took a big step Thursday toward getting back to the CIF-Southern Section finals with a 3-2 win over visiting Redondo in a Division 3 quarterfinal.Dominique Mejia had two hits and Jamie Wren tossed a seven-hitter and struck out nine for No. 2 seed La Serna, which improved to 24-6 and will travel to Bishop Amat for Tuesday’s semifinals. The Lancers lost to St. Paul in the title game last season.Allison Betty had three hits and Kathryn Ung gave up eight hits and stuck out eight for the Sea Hawks, who finished 22-8.

“I was thinking just base-hit,” Ayala said. “I was real nervous, but I calmed down, and once I got a hold of the ball, I was just hoping Jocelyn could come in and score. When I saw that, it was full excitement. I couldn’t believe we won.”
Tori Ayala set up the winning rally with a out-out double off the left-field fence. Vanessa Ayala then lined a single to left field. The throw home was low and skipped by catcher Samantha Pech, allowing the winning run to score.

“We talked about at the start of these playoffs that you have to have great defense, good pitching and timely hitting,” La Serna co-head coach Mike Orona. “We got that timely hit there, and luckily, we won the game today.”
Redondo had chances to win it earlier, getting a runner at third with one out in the seventh and runners on second and third with two outs in the 12th. Wren denied the Sea Hawks each time.
She got a strike out and ground out to end the seventh before inducing Ung to ground out in the 12th.

“You’re going 12 innings,” Redondo coach Jennifer Dessert said. “At that time, it’s about who is going to get the clutch hit. We had a couple of chances with runners (in scoring position). We couldn’t come up with that clutch hit, and they did.”
Redondo took a 2-0 lead in the second. The Sea Hawks got a single from Betty and Morgan Moczygemba was hit by a pitch. Pech, with runners on second and third following a ground out, reached on a throwing error, with both runners scoring.
La Serna tied it in the third. Taylor Becerra singled with one out and Mejia doubled to right-center field. Becerra then scored on a wild pitch before pinch-runner Ashley Zamora scored on a botched run-down play to tie it.
The Ayalas then came through in the 12th to get the Lancers into the semifinals for the third consecutive season.