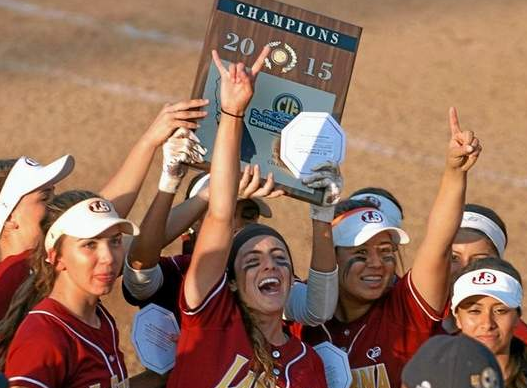 IRVINE — Redemption!The La Serna High School softball team had waited all season for a second shot at a CIF-Southern Section Division 3 title, and the Lancers didn’t waste the opportunity Friday, and doing so in exciting fashion.Mel Madrigal capped a two-run rally with a line-drive single to center field and the Lancers secured the title with a 5-4 victory over top-seeded Grand Terrace at Barber Park.Dominique Mejia also had two RBIs and Jamie Wren limited the Titans to two hits over the final four innings for La Serna, which finished 26-6, winning the school’s fourth softball division title, and first since 2008. The Lancers lost to region rival St. Paul last season.Danielle Rico had a two-run home run and Destini Peck had two RBIs for Grand Terrace, which finished 26-4.

“After three years, it’s been so insane,” Madrigal said. “We just wanted it so bad. Right now, we just want to get on the bus and not think about anything, except for us. It’s fantastic.”
La Serna, which cut a four-run deficit to 4-3 after scoring two runs in the fourth and one in the sixth, didn’t get out in the seventh.
Jelli Lopez led off with a single before a throwing an error on a sacrifice bunt by Sydney Saucedo put runners on second and third. Tori Ayala, one of the stars in a come-from-behind victory over Redondo in the quarterfinals, followed with a single to tie it at 4.
That left it up to Madrigal, who singled to win it.
“I just knew my team was behind me and I had to make something happen, either a base hit, or something and get the run in,” Madrigal said. “It happened. My team came at me with open arms and we dogpiled. It was a great moment for us.”
Wren, who finished the season 24-3, kept La Serna in it after struggling early.
Grand Terrace took a 2-0 lead in the first after opening with back-to-back singles before scoring two runs on a fielder’s choice and throwing error.
Rico then made it 4-0 in the third with a two-run home run to left field.
But Wren shut the door the rest of the way, limiting the Titans to two hits over the final four innings. She finished with a six-hitter and struck out three.

“We knew with Jamie in there pitching, she’d keep us in the game,” La Serna co-head coach Mike Reed said. “We knew these girls would just battle. They are outstanding young ladies who know how to play the game, and they did their job today.”
La Serna chipped away at the deficit.
Mejia had a two-run single in the fourth to make it 4-2 before a Taylor Becerra RBI single made it 4-3 in the sixth.
The Lancers looked like they wasted their best chance after stranding the tying and go-ahead runners in the sixth when Melanie Olmos induced a ground out and fly out. But the Lancers rallied for the winning runs in the seventh.

“It feels unreal,” said Wren, who has played a pivotal role in getting the Lancers to the past two Division 3 title games. “I’m glad I did it with this group of girls. They are an amazing group. It’s a great way to end the season.”