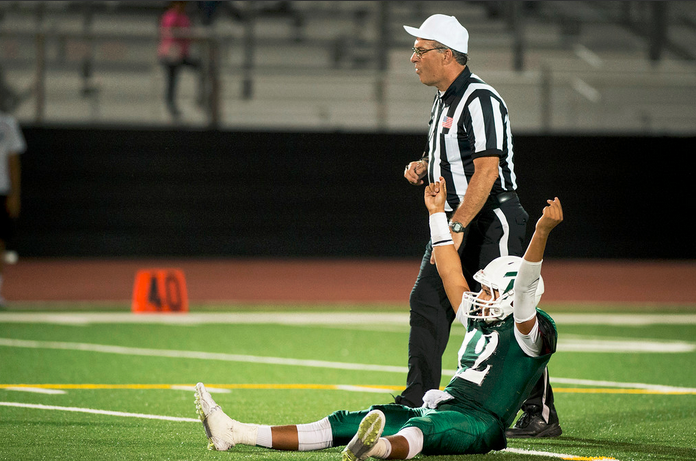 WHITTIER >> Dick Torres Memorial Stadium isn’t the only thing that’s new and improved at Pioneer High School.
The Titans’ football team also fits the bill, and Pioneer continued with its turnaround Thursday.
Senior quarterback Phillip Hernandez threw for 268 yards and four touchdowns and the Titans improved to 5-0 with a 47-7 victory over Cantwell Sacred Heart of Mary in a nonleague game at Dick Torres Memorial Stadium.
Pioneer, which was 1-9 last season, two by forfeit, is 5-0 for the first time since 2002 when the Titans were 9-3 and finished third in the Del Rio League.
Will Haucly rushed for 153 yards and Nick Griffin had 60 and a touchdown for Cantwell, which slipped to 0-4.
Pioneer, which is averaging nearly 45 points a game, led 27-7 at halftime.
The Titans followed a slow start with a second-quarter blitz to take control.
Hernandez, who was averaging nearly 200 yards passing a game during the first four victories, made it 7-0 with a 34-yard pass to David Dorado with 20 seconds left in the first quarter.
The Titans then made it 20-0 halfway through the second quarter. Michael Chavez had a 5-yard run for a 13-0 lead early in the second before Hernandez pushed the advantage to 13 points with a 20-yard toss to Rodrigo Yanez with 7:02 left in the half.
Hernandez had 144 yards and three touchdowns in the first half.
Pioneer’s Phillip Hernandez: “We just worked our buts off. We’re home now. We’re playing for our alumni too. There are guys from a few years ago who put the work in this program and this is the reward.”
— Stephen Ramirez
LA HABRA 49, COLONY 6
It’s starting to look like Colony and football coach Steve Randall bit off a little more than they could chew.
The veteran coach and his team were coming off a CIF Central Division championship and he wanted to make sure his team was prepared for Mt. Baldy League play. He set up a challenging schedule, maybe a little too challenging.
The Titans were overwhelmed for the third straight week, this time falling to visiting La Habra 49-6 Thursday night in their first home game of the season.
The Titans (1-3) opened the season with a win over West Covina, then it has been lopsided losses to juggernauts Alemany and Bishop Amat. La Habra showed it probably belongs in that discussion, too.
The Highlanders (4-1), ranked No. 1 in the Southwest Division, led 35-6 at the half and never looked back. The numbers told the story as Colony managed just 57 yards in total offense while La Habra (4-1) tallied 234 in the first half. It could have been uglier had La Habra not lost two fumbles.
— Michelle Gardner