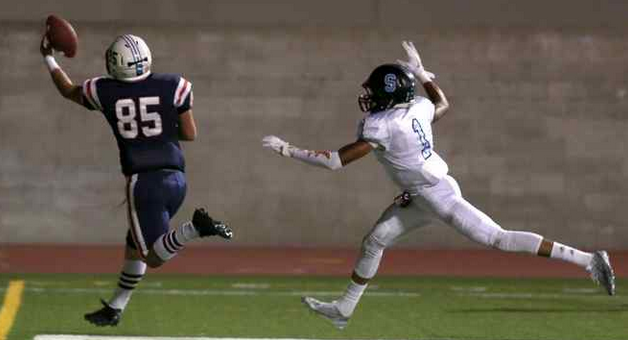 SANTA FE SPRINGS — St. Paul High School’s playoff quest is alive and well.
Isaiah Lemos returned a kickoff 93 yards with 40 seconds left and the host Swordsmen stayed in the postseason hunt with a 24-17 victory over Salesian on Friday in an Angelus League game.
Greg Nevarez rushed for 102 yards and two scores for St. Paul (5-3, 2-1). The win keeps the Swordsmen tied for second with Cathedral. St. Francis defeated the Phantoms, 31-14, on Friday. Harvard-Westlake, which hosts La Salle tonight, is the leader at 2-0.
The game looked like it might go to overtime after the Mustangs (4-4, 1-2) drove 83 yards and tied it at 17 on a 25-yard field goal by Christian Renteria with 54 seconds to play.
Lemos then took the kickoff at his 7, slanted left before eluded three tacklers at about his 40 and headed down the sideline for the winning points.
Salesian, which got 116 yards passing from Robbie Blosser, got a 20-yard kickoff return by Justin Manyweather to the 50 before a personal foul moved it to the St. Paul 35. The Mustangs advanced it to the 28 before Blosser threw incomplete in the end zone with no time left.
St. Paul built took a 17-7 lead in the third quarter on a 40-yard run by Nevarez with 2:56 left. Salesian countered with a 63-yard run my Manyweather to make it 17-14 with 2:41 left in the quarter.
St. Paul led 10-7 at halftime, opening and closing the half with scoring drives.
— Stephen Ramirez
LA HABRA 62, FULLERTON 13
FULLERTON — And the streak goes on.
The La Habra High School Highlanders easily won their 45th consecutive Freeway League game over the last nine years, defeating host Fullerton 62-13 Friday night at Fullerton District Stadium.
Quarterback Eric Barriere tied a career high with seven touchdown passes. He also threw for seven last season against Sonora.
The senior threw for 346 yards, all in the first half, and completed 20 of 31 passes.
Three different receivers caught two touchdowns each for La Habra, which has won six CIF titles since the 2002 season, including four in a row from 2007-10.
La Habra’s Eric Barriere: “We wanted to build up the confidence in our receivers this week and show everyone we are a very balanced team. (Our league winning streak is) pretty crazy. Forty-five games is a lot, kowing that we haven’t lost a league game yet. Our main goal this year is to win CIF. Everybody has been working really hard towards that goal.”
— John Sherrard
ROUNDUP
Santa Fe 27, Pioneer 7: Santa Fe High School remained on track to the Del Rio League championship by defeating Pioneer, 27-7, on Friday night. The Chiefs (4-4, 3-0) forced six turnovers and built a 27-0 lead to extend their winning streak against the Titans (6-2, 1-2) to more than a decade. Robert Lucia returned an interception 15 yards for a score and Chris Ramsey hit Anthony Valdivia for a 22-yarder en route to a 17-0 halftime lead. Edward Cisneros, who rushed for 119 yards, scored on a 25-yarder in the third quarter.
— Teren Guerra
Schurr 20, Bell Gardens 17 (OT) — The running game of Efren Velez and Anthony Varela propelled the Spartans to a huge Almont League victory at Montebello High. It put the Spartans (3-5, 2-1) right back in the league title race with the Braves (5-3, 2-1). Both trail undefeated Montebello with two games to play. The Spartans’ defense stuffed the Braves on their overtime try, a sack knocking Bell Gardens out of field goal range. Velez carried the ball three times to get a first down and Varela carried the ball twice to get inside the 5. On fourth down, Pedro Moreno kicked his second field goal of the game, a 19-yarder for the win; his 28-yarder with 23 seconds to play forced the overtime.
— Angel Gutierrez
Montebello 37, San Gabriel 8 — The Oilers (7-1, 3-0) scored 27 points off of four first-half interceptions en route to a 30-0 halftime lead in an Almont League game. The win was the Oilers’ 13th consecutive league victory. Quarterback Ryan Rivera threw for 194 yards and scores of 19, 29, and 36 yards.
— Rudy Ramos