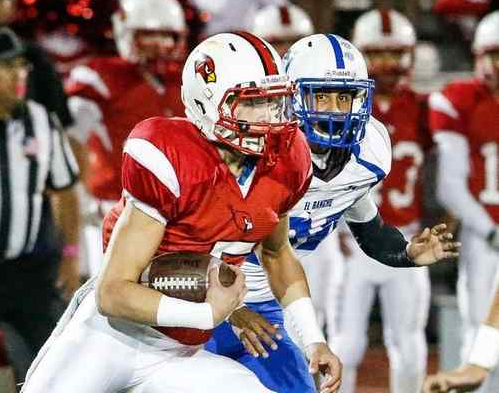 WHITTIER 21, EL RANCHO 14
WHITTIER — The Whittier High School offense could not get untracked in the second half.
So the Cardinals relied on the defense until the offense could find a little bit of momentum in a 21-14 victory over visiting El Rancho in a Del Rio League game on Thursday night at Pioneer High.
The winless Dons had the ball twice inside the red zone, but failed to score, giving the Cardinals their first league victory.
“We needed to make some big plays and we made them on defense fortunately,” Whittier coach Vicko Ancich said “The guys were working hard. We had great pressure and a great attack.”
Whittier (4-4, 1-2), which had trouble running the ball, broke a 14-14 tie with 8:28 to play by running the ball. Quarterback Dylan Salcido kept it on nearly every play, rushing the ball five times on the 10-play, 72-yard drive. He threw his third touchdown pass of the game to Anthony Rios, who made a one-handed grab of the 13-yarder.
— Keith Lair