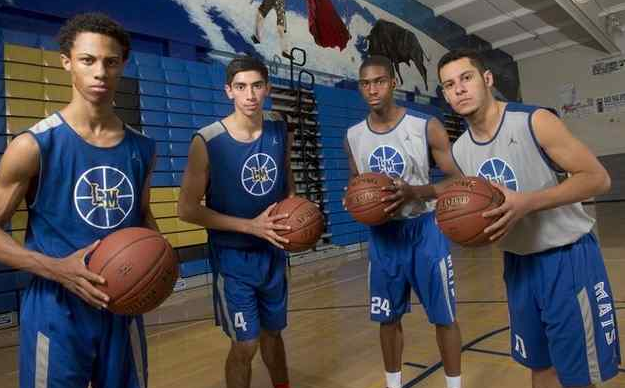 By Stephen Ramirez
It was a dream season in 2015 for the La Mirada High School boys basketball team, which went 31-5 and won its first CIF State championship.What do the Matadores do for an encore?They get back to work.
“We’re really excited about the potential,” La Mirada coach Bryce Jones said. “We have a good group of core guys, along with a a transfer who has (signed) with Dartmouth. But we’re not focused on winning another state title. Our focus is on the daily process.
“Everyone talks about us winning another state title, but we’re trying to avoid that talk, and just work on the daily process. We’ve never been in this situation before, and it’s easy to get into your head. But we’re just worried about whoever our next opponent is.”
La Mirada, which won the Division II title, is expected to be a big player again in the division. Top player Kendall Lauderdale has graduated, but almost everyone else has returned, including guard Vittorio Reynoso-Avila. The senior has the potential to be one of the area’s best after averaging 12 points and six rbounds per game last season.

The Matadores also feature guard Anthony Newman, who averaged 10.1 a game, and guard Dylan Banks, who put in 6.4 game. Swing player Ian Carter, a transfer from Serra who has signed to play at Division I Dartmouth next season, gives the Matadores arguably the top guard groups in the area.
La Mirada will again be the favorite in the Suburban, and like a good bet to secure its first CIF Southern Section crown.
“We lost a great player in Kendall,” Jones said. “We can’t replace a player like Kendall, but we have guards who a year more experence. Our guard play (should be) excellent.”
2. CANTWELL-SACRED HEART OF MARY (17-14)
The Cardinals has arguably been the area’s top program since 2012, making one trip to a CIF-SS final and four consecutive visits to the state playoffs.
More of ther same is expected this season. Cantwell lost two the area’s best big men — Gligorije Rakocevic and Balsa Dragovic — to graduation, but there are enouugh good pieces back to continue the trend.
Senior guard Jacob Davision, who averaged nearly 15 points a game last season, is one of the top returning guards in Southern California. He’ll have help in point guard Elias Zedan and center Luka Radovic, who had 6-8 provides solid inside play, and swing player Jaedyn Bonilla.
“We’re excited about this year,” Cantwell coach George Zedan said. “I don’t know how many wins we’ll have, but it’s a real run group to be around. They play really hard.
“If we stay in Division 4AA, then it could be an interesting, fun time for us. If we get called to the Open Division, then we’ll take it. We’ve never shied away from it. I don’t know if we’d ever win (that bracket), but just being part of it, is a pretty big deal for us. But our goals are the same – we want to win our league, compete for a CIF championship and we want to compete for a state championship.”
3. SONORA (29-5)
The Raiders, after advancing to the CIF-SS finals the past two seasons, winning one title, were hit hard by graduation. But the program is strong.
They lost their top three players, but still have some nice pieces to lead on.
Forward Austin Carter saw limited action last season, but could emerge as one of the top inside players in the area at center and forward. Kevin Marlow and Bryce Rutledge are good options at guard.
4. WHITTIER (21-6)
The Cardinals are the favorite in the Del Rio League after finishing third last season.
Whittier, now coached by Chris Dalley, returns its top two scorers in Miguel Salazar and Anthony Rios, who averaged 15 and 13 points a game.
The Cardinals also feature senior guard Malik Pittman, who averaged nearly six points a game.
5. WHITTIER CHRISTIAN (17-10)
The Hearlds play in one of the tougher leagues in Southern California, but should still sport one of the better records in the area.
Whittier Chrisitan returns its top two players in senior guard Christian Alvis-Labadie and senior swing player Christian
Alvis-Labadie, who averaged each averaged 12 points a game.
The Heralds, in a league with power Maranatha, are expected to be in the running in the Olympic League, but could do some damage in December tournament and in the CIF-SS playoffs.