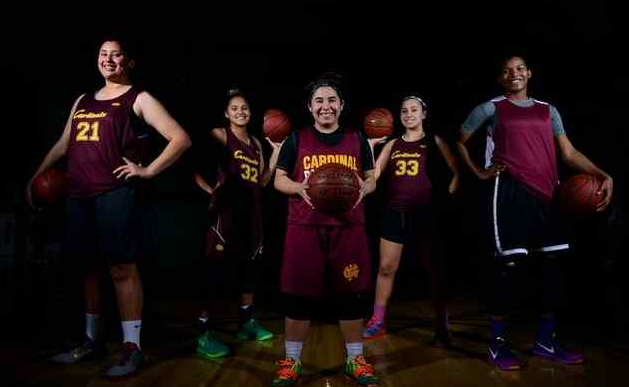 By Stephen Ramirez
Cantwell-Sacred Heart of Mary felt it let a possible CIF Southern Section girls basketball title slip away last season.The Cardinals, who were upset in the Division 4A quarterfinals, hope to do something about it this season.Cantwell begins the season ranked No. 1 in the area.“I think the disappointment of losing that quarterifinal game and not even getting an opportunity to get into the semifinals, for us to fall short has left a bad taste in our mouth,” Cantwell coach Matt Zamora said. “That’s been kind of our motivation over this whole offseason. For (some players), it’s their last go at it, so they want to make the most out of this year.”
Cantwell’s source of optimism comes in bringing back arguably the best player in the area — junior forward Lily Perkins, who averaged nearly 15 points a game and had 10 rebounds per contest. She’s a versatile talent who can take over games at anytime.
But she’s not alone. The Cardinals return two other impact players in senior guard Sammy Flores, who averaged nearly six a game, and junior center Emily Guerena, who in a limited role averaged seven rebounds and four points a game.
Cantwell is strengthen by transfer Valeria Lizarraga, who averaged nearly 14 points and seven rebounds per game for St. Pius-St. Matthias last season.
“It’s a combination of mixing the new girls in,” Zamora said. “Lily looks way better than she looked last year. We have an opportunity to be very good again.”

2. ST. PAUL (19-15)
The Swordsmen have arguably been the area’s top program over the past two seasons, advancing to back-to-back CIF-SS title games and consecutive state tournament appearances.
They lose a key piece off those teams as 2015 Daily News Player of the Year Clarissa Perez as graduated.
But there are enough solid options to continue St. Paul’s recent run, most notably 2015 All-Area player Adriana Gonzalez. She will be the go-to player for the Swordsmen this season, and has the ability to live up to the billing and fill the role that Perez has vacated. The senior center averaged more than 10 points a game, including scoring a career-high 34 points in the semifinals.
Another key player is sophomore forward Tia Banks, who possesses a lot of athleticism and has the ability to take over games as well. She was second team all-area last season.
The Swordsmen also can look to junior center Nalon Smith and sophomore forward Valerie Godinez, who give St. Paul one of the more balanced teams in the area.
The Swordsmen play in the tough Del Rey League, so a league title is not expected, but this is a team that can compete for a Division 4A title.
3. SONORA (21-7)
The Raiders finished a solid second to Troy in the Freeway League and advanced to the CIF-SS 3AA Division quarterfinals last season.
They have all the pieces to make a similar run this winter.
Sonora is solid up front and in the backcourt, which will cause most opponents fits.
The key comes up front, where Lainie James is one of the top inside players in the area. She averaged 12.5 points a game as a freshman and is expected to be better this season. She was first team all-area last season.
But the Raiders are also strong in the back backcourt. Junior Meghann Henderson, another all-area player, is back after averaging 11 points a game. Sonora also welcomes back senior Jazz Shedd, who was steady a year ago with a 7.5 a game average.
4. LA HABRA (14-11)
The Highlanders have the potential to challenge in the Freeway League, which as been ruled by Troy in recent seasons.
La Habra’s strength rests with junior Emma Zener, who was one of the top guards in the area last season, and senior Amanda Cuervo, one of the better inside players in the area.
Zener is the team’s top scoring option with a 11 points per game average. Cuervo is solid inside after averaging 10 points and 13 rebounds per game.
Hannah McArthur, who averaged eight points and 10 rebounds per game, is also back.
The key for the Highlanders will be consistency, which showed in losses to Troy and Sonora. They are a year older, so it could make a difference this season.
5. EL RANCHO (20-11)
The Dons have been the team to beat in the Del Rio League in recent seasons, and that’s not expected to change this season.
El Rancho lost their top three scorers to graduation, but there still seems to be enough on the roster to make a run at a fourth consecutive league title.
The key will be junior Brittany Corona, who averaged eight points a game, but with an increased role, she has the ability to step up that average a bit.
The Dons can also look to senior Cassie Fischer, who averaged six points a game, and junior Amy Navarro, who averaged nearly five rebounds per game.