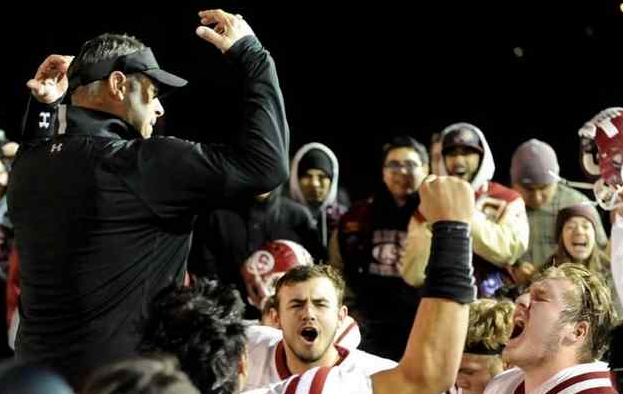 The area’s eltie football teams marched on Friday, each winning to advance to the CIF-SS finals. We get a battle of the Whittier area in the Southeast with La Serna at La Mirada, while La Habra won easily and will host San Clemente for the Southwest title.

strong>LA SERNA 24, ST. FRANCIS 10LA CANADA FLINTRIDGE —La Serna High School believes that no matter the situation, it’s never out of a football game.The Lancers proved it again Friday and it earned them a chance at their second CIF Southern Section Southeast Division title in three seasons.
Matt Marshall and John Ceballos scored second-half rushing touchdowns and La Serna shut down host St. Francis in the second half in a 24-10 semifinal victory.
The Lancers, in the semifinals for the sixth consecutive season, rushed for 144 yards in the second half and held the Golden Knights under 100 yards over the last two quarters to improve to 11-2. They advanced to next week’s championship game and will travel to La Mirada, a 38-7 winner over Cathedral, next Saturday.
St. Francis, which got a 174 yards passing and a touchdown from Miles Bryant, finished 9-4. The Golden Knights were looking to advance to a CIF-SS final for the first time since 1964.
La Serna’s Matt Marshall: “We knew what we had to do. We beat them last year and we knew what we had to do to beat them this year. No one was giving us a chance, but we just had to come out and do it, and get (a shot at the championship), which we think is rightly ours.”
La Serna coach Andy George: “It was about these kids and how much they fight. All they know how to do is fight. That showed in the second half.”
St. Francis coach Jim Bonds: “Our defense was on the field an awful long time. We just couldn’t get anything going, offensively. You can’t do that. You have to give your defense a chance to catch its breath. That’s a good football team. La Serna is a good football program, and they did make some good adjustments at halftime.”
— Stephen Ramirez
LA MIRADA 38, CATHEDRAL 7
LOS ANGELES — La Mirada High ran into next week’s CIF title game with authority on Friday night.
The Matadores powered into the championship round with a strong effort from their offensive line and a big rushing performance from Sei-j Lauago as they beat Cathedral 38-7 in a Southern Section Southeast Division semifinal at Cathedral.
The Matadores (10-3) were paced by Lauago, who piled up 188 yards on 24 carries and found the end zone three times.
Conversely, the Matadore defense put steady pressure on Phantoms quarterback Andrew Tovar and took him down for losses five times.
La Mirada, the Suburban League champion, will meet La Serna for the section title on Dec. 5.
— Mark Carpenter
LA HABRA 42, VILLA PARK 21
LA HABRA — After a four-year absence, the La Habra High School football team is back in the CIF-Southern Section championship game.
A wild, high-scoring game was culminated with the six-time CIF champions defeating No. 5 seed Villa Park, 42-21, Friday night at La Habra in the Southwest Division semifinals.
La Habra, which in 2010 had completed the first CIF title four-peat in school history, will play for its seventh championship on Friday night.
The Highlanders, who won their 10th consecutive game, will host second seed San Clemente (11-2), a 63-34 winner over No. 6 seed Buena Park, next week at a site to be determined.
La Habra coach Frank Mazzotta: “Going to the CIF finals is always special. We had a stretch of semifinals that seemed like forever, but it’s nice to get back to the championship game. What a great high school football game and (senior quarterback) Eric (Barriere) has accomplished so much.”
La Habra’s Eric Barriere: “It means a lot going to the championship in my senior year. This shows everybody that we are still a dominate program. This was a very good opponent (Villa Park).”
CIF-SS CHAMPIONSHIP SCHEDULE
Southwest Division
Friday, Dec. 4
San Clemente (11-2) at La Habra (12-1), 7:30 p.m.
Southeast Division
Saturday, Dec. 5
La Serna (11-2) at La Mirada (10-3), 7:30 p.m.