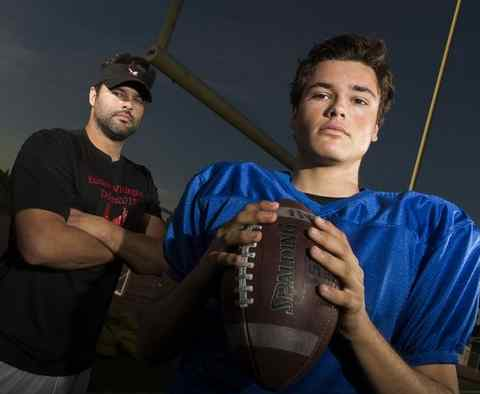 Its all in the family as La Mirada High School’s Quarterback Tristan Meyer is coached by his brother Erik Meyer, Quarterback Coach for La Mirada football as they prepare for the state playoffs in La Mirada, CA. Wednesday December 9, 2015. (Thomas R. Cordova-Daily Breeze/Press-Telegram)

By Abbey Mastracco
Long Beach Press Telegram
LA MIRADA — Erik Meyer can still remember the day that his parents told him that they were pregnant with their third child. It’s not a day that one typically forgets. Meyer was already standout quarterback at La Mirada High School, 16 years old and soon enough, would be bound for Eastern Washington and then the pros.How would he bridge a 16-year age gap?Once his little brother Tristan came along, he realized that the answer was simple: Football.“It was kind of a big shock to hear that,” Erik said. “But once I started watching him grow up, he was in sports and I just knew that he was going to be a football player.”Tristan did become a football player. Thanks, in part, to his big brother, he’s now the quarterback for the very same high school team that his brother once starred on and with the help of his brother, he’s prepping for the Matadores’ CIF State Division III-AA SoCal regional championship game, scheduled for Friday at 7:30 p.m. against Oceanside.

Girls soccer
California 3, Bellflower 0 — Jolene Ceniceros, Samantha Garcia and Brianna Saldana each scored a goal to lead the Condors (3-0) to the nonleague win. Saldana also had an assist.

By Stephen Ramirez
WEST COVINA — Cantwell-Sacred Heart of Mary High School dug itself a hole Wednesday. But unlike it’s one-point win over South Hills on Monday, the Cardinals couldn’t climb out of it.Stephanie Custodio scored 29 points and Alyssa Gonzalez had 21 to lead Chino to a 68-63 victory over Cantwell in a Covina Classic girls basketball tournament quarterfinal at South Hills High School.Rebecca Navar also had 10 points for the Cowboys, who improved 3-1. They will face either Bishop Amat or South Torrance in Friday’s semifinals at 6:30 p.m. at Covina High School.
Valeria Lizarraga had 21 points and Lily Perkins 18 for the Cardinals, who slipped to 5-1.
“I take nothing away from Chino,” Cantwell coach Matt Zamora said. “They played a very good game. We just have a knack of putting ourselves in holes, and sometimes you run out of time.
“It happened again today. Again, taking nothing away from them, it’s a result of some of our own actions. We need to stop doing that stuff.”
Cantwell rallied from a 10-point deficit in the first half to lead 51-49 early in the fourth quarter following a putback by Perkins. But Chino countered with a 3-pointer by Navar and an inside basket and two free throws by Custodio to lead 56-53 with four minutes to play.
The Cowboys then outscored Cantwell 12-10 down the stretch.
Wednesday’s Quarterfinals
Top Half
South Torrance vs. Bishop Amat at Covina HS, 6:30 p.m.
Chino 68, Cantwell-Sacred Heart of Mary 63
Bottom Half
Covina 45, Bonita 40, 2OTs
Roosevelt 57, El Rancho 45
Friday’s Semifinals:
Chino vs. South Torrance-Bishop Amat winner, 6::30 p.m.
Covina vs. Roosevelt, 8 p.m.
Championship: Saturday

Girls soccer
California 1, Ocean View 0 — Jolene Ceniceros scored a goal and Samantha Garcia had an assist to lead the Condors (2-0) to a nonleague win. Goalkeeper Rachyl Robles had four saves for Cal.