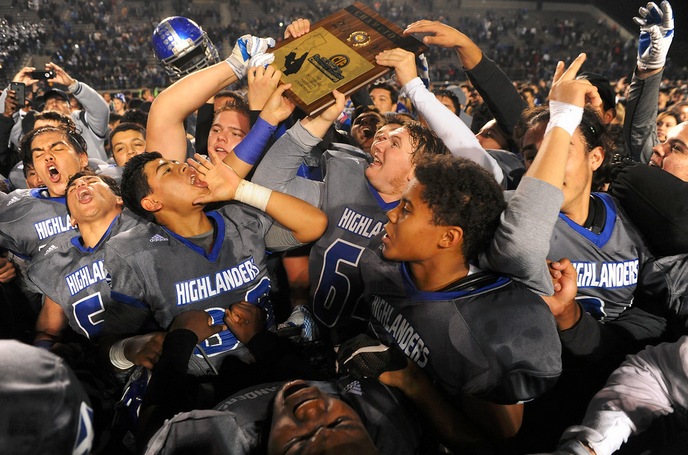 LONG BEACH >> It’s a new day in the CIF Southern Section.As many expected, Proposal SS522, which is known as the “Playoff Groupings by Competitive Equity” proposal, passed at Wednesday’s CIF-SS council meeting at the Grand in Long Beach.The proposal was approved by a vote of 74-10-1. The voters were made up of representatives from the 88 leagues in the Southern Section, as well as a handful of at-large representatives.School enrollment size will no longer determine playoff divisiod, nor will league placement. Instead, each school in each sport will be evaluated on an annual basis by their performance over the last two years, using regular season record, strength of schedule and playoff performance to determine what division they’ll be placed in starting this for the 20-16-17 season.Power rankings updated each year will determine playoff divisions for each sport. Six different teams in one league could all end up in different divisions if that’s where the power rankings place them.The new proposal will affect every “bracketed” sport in the CIF-SS, including football, volleyball, soccer, basketball and baseball, among others. Not affected would be “meet” championship sports like cross country and track and field.
CIF-SS Commissioner Rob Wigod: “I’ve been saying and I believe that this is as big a change as we’ve made in our history, in a 100 years.”
— Mike Guardabascio

LOCALS REACT
LONG BEACH — Without any debate or conjecture, the CIF-Southern Section passed a historic motion on Wednesday that will drastically alter the way playoff divisions are grouped.Instead of grouping playoff divisions by league, they will now be grouped by teams based on competitive equity beginning with the 2016-17 school year. The motion applies to all sports.This means that teams from the same league could be placed in different playoff divisions depending on their competitive equity rating based on the past two season’s worth of data. Teams will find out their playoff divisions each August and their placement can change annually.The motion passed Wednesday with a vote of 74 to 10, with 1 abstention. As for the local tally, only the Hacienda League voted against it. The Baseline League, which has only one local team in Damien, also voted against it.
West Covina AD Brian Murphy: “I don’t think it’s so much that we weren’t in favor of it. My perspective, and I’m not going to speak for the rest of the schools, is that I think it’s a good idea for all sports, except for football. And I don’t think we know how football is going to play out as far as how they’re going to re-division it and how they’re going to do their rankings. Some of us weren’t comfortable with maybe a second place or third-place team not guaranteed entry into the playoffs depending on how the divisions played out. I’m curious how they’re going to do the rankings and do the divisions. Where does Los Altos get placed? This year they missed the playoffs and two years ago they made the finals. Do they get moved up a division?”
Damien baseball coach Andy Nieto: “I look at it different, doesn’t make it right or wrong. I would welcome the challenge and try to figure out how to compete at that next level.”
— Aram Tolegian

Stephen Ramirez’s take: I like the new plan, which should allow most playoff brackets more balanced than they have been in the past. The only problem I see is a “tweener” program, which can get stuck in a playoff division it’s not competitive in. If it has some success, but not a lot, or is not really bad, it can get stuck. But I like it, because in theory all the divisions in all sports should be competitive. But the really challenge will come when and who sets up the divisions. Let’s hope its not like the now defunct Bowl Championship Series computer. Give it time. 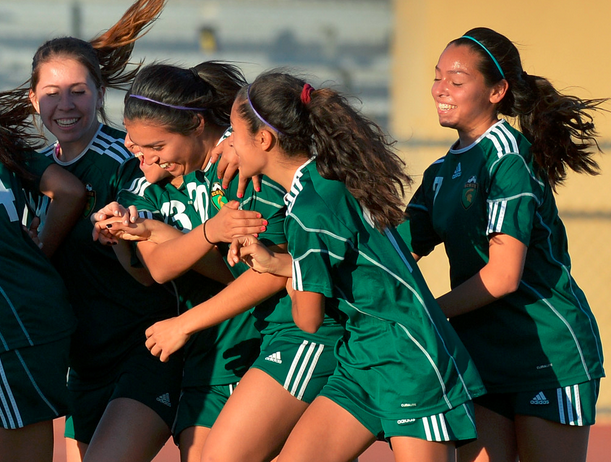 Schurr’s Cristina Garcia, 20, center, is congratulated by teammates after scoring a goal in the second half of their game agains Montebello in their Almont League girls soccer game at Montebello High School on Tuesday January 26, 2016. Schurr defeated Montebello, 1-0. (Photo by Keith Durflinger)

MONTEBELLO — Schurr High School took a big step toward a second consecutive Almont League title Tuesday.
But like most games against rival Montebello, it wasn’t easy.
Cristina Garcia scored off a cornerkick in the second half and the Spartans took a two-game lead in the league title chase with a 1-0 victory at Montebello High School.
Schurr, ranked No. 4 in the area and No. 7 in CIF Southern Section Division 6, outshot the Oilers, 19-2, to improve to 11-0-1 overall and 5-0 in league play. The Spartans shared the league crown with Alhambra last season.
Joanna Paulino had nine saves for Montebello, which slipped to 8-8-2 and 3-2.
Schurr, after being denied on 11 shots during the first half, caught a break during the back half of the second half. A turnover forced a cornerkick that the Spartans didn’t waste. Brianna Barriaga lofted a crossing pass that was headed out by Alexter Hernandez.
But Natalia Perez headed it back toward the goal to Garcia, who put it off her right foot past a diving Paulino for the 1-0 lead in the 64th minute.
Schurr’s Cristina Garcia: “This win puts us undefeated for the first round of league. We’ll definitely see more of challenge (in the second round), but I feel we’re strong enough to pull through that. We’re just shooing for first place in league, so we’re excited.”
Montebello coach Jose de Leon: “Joanna (Paulino) kept us in the game quite a bit. She did an awesome job. She made three or four crucial saves, which helped us stay in the game. Schurr’s undefeated and ranked in CIF, so it’s a good showing for us. We don’t like to lose, but we played them hard, we played them well. We learned from this, so that way we can face them again and get the win.”
— Stephen Ramirez

BOYS BASKETBALL
SOCAL SHOOTOUT
SONORA 80, CLAREMONT 73
AZUSA — It’s been mostly hit and miss for the Sonora High School boys basketball this season as they Raiders rebuild from advancing to a CIF Southern Section title game the previous two seasons.
Saturday was one of the good days.
Austin Carter had 23 points and Kevin Marlow 18 to lead Sonora to a 80-73 victory over Claremont in the 14th Southern California Shootout at Azusa Pacific University’s Felix Event Center.
Mike Schmidt also had nine points for the Raiders, who improved to 12-9. Sonora won the 3AA Division last season and was runners-up in 2A in 2014.
Kyle Scalmanini scored 23 points and Harlan Maass and Davis Haley had 13 each for the Wolfpack, which slipped to 15-5.
Sonora’s Austin Carter: “It feels good. We worked hard (in this game). We’ve been working hard all year. It’s a good feeling to get this win.”
— Stephen Ramirez 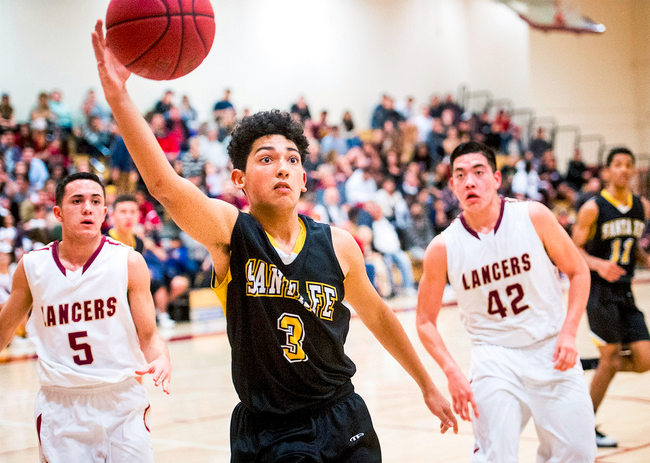 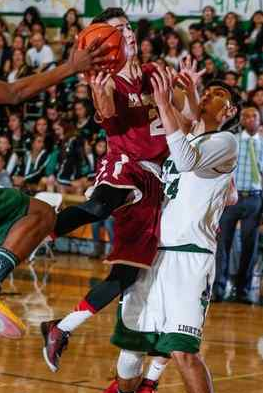 WHITTIER — La Serna High School has been an area football power in recent seasons, and this season the Lancers have shown they are pretty good in boys basketball as well.
La Serna continued its turnaround Wednesday.
Cedric Sobers scored 21 points and the visiting Lancers stayed perfect in the Del Rio League with a 53-32 victory over 2015 champion Pioneer.
Jessie Garcia and Jacob Fuller had seven points each for La Serna, which improved to 14-6 overall and 3-0 in league play. The Lancers are 3-0 in the Del Rio League for the first time since going 10-0 to win the title in 2009.
Justin Brown had 13 points for Pioneer, which slipped to 9-8 and 2-1.
The pivotal moment for La Serna, which missed its first 12 shots to begin the game, came in the third quarter when it outscored the Titans, 19-10, to break open a close game.
La Serna used an 11-2 run for a 34-25 lead. Sobers made consecutive shots for a 26-23 advantage before Fuller followed with a 3-point play to push it to 29-25 with 2:35 left in the quarter.
Fuller and Jonathan Hernandez then made consecutive field goals to push it to 34-25. Hernandez completed the quarter with a fast-break layup for a 36-25 lead.
La Serna coach Marino Angulo: “I’m very pleased. I knew we were going to be pretty good. We’ve played a lot of games where they were very close and we found ways to win. It shows the character of our team. We go out respecting our opponent, and on the other hand, we want our opponent to respect us, and I think they are starting to recognize that we can play a little bit of basketball.”
La Serna’s Cedric Sobers: “We were able to swing the ball, play our offense and playing great ‘D.’ That’s what wins, defense.”
— Stephen Ramirez
OTHER SCORES
BOYS BASKETBALL
DEL REY LEAGUE
St. Bernard 62, Cantwell-Sacred Heart of Mary 61
DEL RIO LEAGUE
Whittier 72, El Rancho 28
FREEWAY LEAGUE
Troy 79, Sonora 61
Fullerton 58, La Habra 50
SANTA FE LEAGUE
St. Paul 60, St. Pius-St. Matthias 33
SUBURBAN LEAGUE
La Mirada 64, Artesia 40
GIRLS BASKETBALL
DEL RIO LEAGUE
El Rancho 52, Whittier 34
La Serna 40, Pioneer 26
Cal 57, Santa Fe 42
FREEWAY LEAGUE
La Habra 52, Fullerton 28
Troy 46, Sonora 32
SUBURBAN LEAGUE
La Mirada 49, Artesia 25