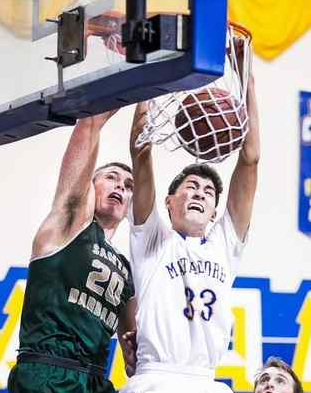 By John Sherrard
LA MIRADA >> For the third year in a row, the La Mirada High boys basketball team failed to reach the CIF-Southern Section Division 2A final, as the Matadores lost 62-57 to top-ranked Santa Barbara on Friday night in a semifinal game at La Mirada high.The Matadores (24-8) lost to Compton last year and to Santa Margarita in 2014.They did, however, recover last season to win their first-ever state title, and will possibly have that opportunity this year if they get another CIF state invitation. La Mirada won in double-overtime last season against Archbishop Mitty.
Santa Barbara (30-1) will play Lynwood, a 64-61 overtime winner over Hart, for the CIF-SS title next weekend at the Honda Center.
“It’s very tough for these guys to lose this game at home, especially after doing this the last two years,” La Mirada coach Bryce Jones said.
“We wanted to get to the Honda Center (and the CIF title game). That was definitely a goal of ours these last two years, and we just haven’t been able to get over that hump.”
Leading the way for the Matadores were a pair of senior guards, Anthony Newman and Vittorio Reynoso-Avila with 15 points each. Newman’s points came on five 3-pointers. Senior guard Dylan Banks added 10 points for La Mirada.
“Newman and Vitto, they have been the winningest duo in this school’s history,” Jones said. “They have just been winners, and for their sake I really wish we could have got them to the (CIF) finals.”
Santa Barbara was led by senior guard Bolden Brace with 16 points, along with 16 points from junior guard Ben Brown.
Santa Barbara built a 12-point lead in the opening quarter, 21-9, behind a trio of 3-pointers. Newman hit a 3-pointer with 25 seconds left in the quarter to pull La Mirada to within 21-12.
After the Dons built a 26-16 lead on a layup by Brown, the Matadores went on a 10-2 run later in the second quarter, highlighted by a pair of dunks by Daniel Cabrera and Rendwick Helaire (six points). La Mirada scored the last six points of the half, ending with a long 3-pointer by Newman to end the half as La Mirada trailed by just one, 34-33.
“I remember when I was a freshman when we got knocked out of the first round, I said to Newman, ‘This isn’t going to happen for long,’ ” Reynoso-Avila said. “Our goal was to come here and change the program, and I think we did by going three years to the semifinals and winning the state.”
Both teams traded baskets in the third quarter, with the Dons leading by a basket, 46-44.
“We gave it our all and I’d do it again with them (team) if I could,” an emotional Newman said. “They (Santa Barbara) played a great game, but it means a lot what coach said.”