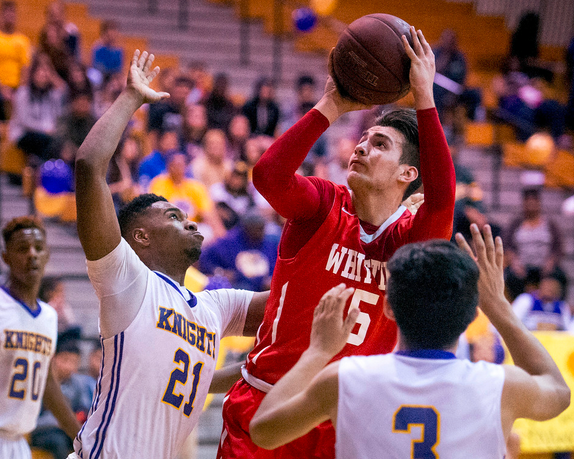 LYNWOOD >> Whittier High School’s best boys basketball season in nearly two decades won’t include a CIF Southern Section title.But there wasn’t a lot of disappointment for the Cardinals on Tuesday after finishing their season with a 73-55 setback to host Lynwood in a Division 2A quarterfinal.
They still managed their best season in 17 years.
The Knights, getting 17 points from Joe Tate, improved to 22-5 and will face either Hart or Cerritos in Friday’s semifinals.
Whittier (20-8), getting 26 points from Miguel Salazar and 11 from Antonio Roberts, will reflect on a season for the ages, which included winning the Del Rio League title and advancing to the quarerfinals for the first time since the late 1990s.
The Cardinals’ fate was dealt during the first quarter when they made just 2 of 18 shots, fell behind 6-0 at the start and trailed 21-6 after the first eight minutes.
Lynwood was 15 of 23 in the first quarter and 23 of 47 for the first half.
Whittier never recovered. The Cardinals trailed 42-25 at halftime and 50-48 after three quarters.
Whittier coach Chris Dalley: “We set goals at the beginning of the season. First was to win league and we wanted to make a run in CIF. We got two big wins for our program, our school, and also for our league.”
— Stephen Ramirez
LA MIRADA 63, REDLANDS EAST VALLEY 50
REDLANDS — For three and a half quarters the CIF Southern Section Division 2A quarterfinal boys basketball game between Redlands East Valley and La Mirada high schools played out like a classic heavyweight battle.
Then the reigning state champions took over.
La Mirada pulled away late for a 63-50 win over No. 4 seed Redlands East Valley Tuesday night, advancing to its second consecutive Division 2A semifinal.
Seniors Carter and Reynoso-Avila, who was playing in just his fourth game since returning from a foot injury, led the Matadores with 22 and 17 points, respectively.
La Mirada (24-7) held a two-point advantage on the Wildcats (25-6) heading into the fourth quarter, but REV went cold for nearly the entire quarter after making it a 47-45 game. The Wildcats went scoreless as La Mirada grinded out a 12-0 run to take command, the momentum shifting on a flagrant foul on Carter. The two ensuing free throws put La Mirada ahead by double digits.
— Chris Trevino
OTHER SCORE
OPEN DIVISION
Compton 60, Cantwell 53
The Tarbabes overcame a fourth-quarter deficit to beat the Cardinals, who are still expected to receive a state playoff selection next week.
FRIDAY’S SEMIFINALS
DIVISION 2A
Santa Barbara at La Mirada, 7 p.m.

Girls soccer
California 1, Palm Desert 0 — Samantha Ramirez scored a goal with an assist from Elvia Villagomez and goalie Rachyl Robles had two saves for the Condors (20-5-1) in a Division 5 second-round match.

By Stephen Ramirez
steve.ramirez@langnews.com
@SteveRRamirez on Twitter
BELL GARDENS >> Schurr High School may be undefeated, but the Spartans don’t feel any pressure of playing with a spotless record in the postseason.
Schurr continued to show it Tuesday, scoring a 3-0 victory over Vasquez in a CIF Southern Section Division 6 girls soccer second-round game at Bell Gardens Sports Center.
Dana Navarrete had a goal and an assist and Rita Villagra and Gisell Ventura also had goals for the Spartans, who improved to 18-0-1 and will face either No. 3 seed Temescal Canyon or Colton at a site to be determined in Thursday’s quarterfinals. Vasquez finished 20-3-2.
“We were confident because we played this team twice before and came away with wins,” Navarrete said. “We were confident, but a little nervous.
“We worked as a team, kept it together and came away with the end product — we won. It’s a good feeling. We’re going on to the quarterfinals.”
Schurr dominated play, outshooting the Mustangs, 27-5, including 11-2 in the first half. The Spartans, after several early attempts were high, broke through in the 17th minute. Brianna Barriga led a rush in the attacking zone before feeding Villagra, who beat Emily Hammonds for a 1-0 lead.
“A lot of times teams can get flustered when they over-shoot and nothing is going in,” Schurr coach Elizabeth Oyarzabal said. “But what I like about this team is they feed off of that. The more shots they get, the more they feel they are in control. It allows them to keep pressing and keep going.”
It also forces the opponent into a mistake, which Navarrete took advantage of when she converted a penalty kick in 73rd minute for a 2-0 lead.
“Our coach always says the one who is the most confident should take the penalty kick,” Navarrete said. “I felt I’m confident, I want to do this. I was able to get the goal.”
Ventura made it 3-0 in the 77th minute.
OTHER SCORES
DIVISION 4
La Mirada 1, Valley View 0
DIVISION 5
La Serna 3, Rio Mesa 0
Cal 1, Palm Desert 0
THURSDAY’S QUARTERFINALS
DIVISION 4
Santa Monica at La Mirada, 3 p.m.
DIVISION 5
La Serna at La Quinta, 3 p.m.
Cal at Alta Loma, 3 p.m.
DIVISION 6
Schurr at Temescal Canyon, 3 p.m. 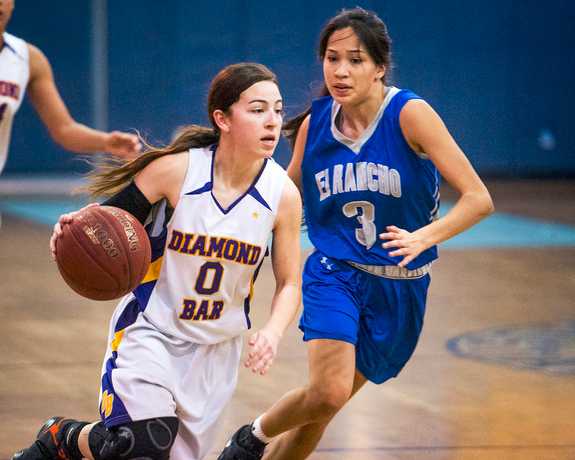 CIF-SS GIRLS BASKETBALL PLAYOFFS
DIVISION 1A
DIAMOND BAR 40, EL RANCHO 32
WALNUT — Diamond Bar High School girls basketball team outscored El Rancho by nine points in the fourth quarter, propelling it to a 40-32 victory in a CIF Southern Section Division 1A second-round game that was much closer than the final score indicated.
After El Rancho (24-6) took a four-point lead in the opening moments of the fourth quarter following a 12-0 run, the Brahmas’ defense tightened, holding the Dons to one point over the final seven minutes.
Meanwhile, the Diamond Bar offense, which repeatedly turned the ball over against the El Rancho full-court press in the third quarter, settled down and created better opportunities.
Diamond Bar coach Tony McCabe: “We were turning it over and you don’t score when you turn it over. When we stopped turning it over and started rebounding we were able to win the game.”
El Rancho coach Randy Shigezane: “This year was a great accomplishment. But we wanted more, this isn’t where we wanted to end our season.”
— Richard Hernandez
SATURDAY’S SCORES
DIVISION 1A
Diamond Bar 40, El Rancho 32
DIVISION 2A
Temescal Canyon 49, Whittier 4
DIVISION 3AA
Sonora 79, Indio 32
DIVISION 4AA
St. Paul 52, Laguna Beach 20
DIVISION 4A
Cantwell 69, St. Genevieve 47
WEDNESDAY SCHEDULE
DIVISION 3AA
South Hills at Sonora, 7 p.m.
DIVISION 4AA
St. Monica at St. Paul, 7 p.m.
DIVISION 4A
Cantwell Sacred Heart of Mary at Louisville, 7 p.m.