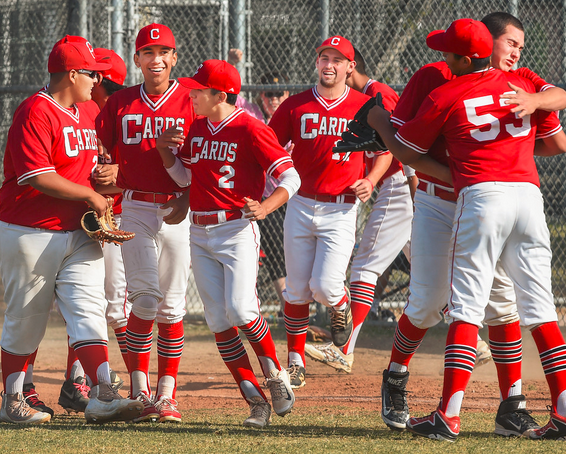 Softball
Schurr 14, San Gabriel 1 — Karen Roman was the winning pitcher and went 4 for 4 with two RBIs to lead the Spartans (15-4, 5-1) to the Almont League win. Schurr compiled 14 hits. Marissa Fernandez went 4 for 4 with an RBI and Jazmine Ayala went 2 for 2 with a triple and three RBIs. 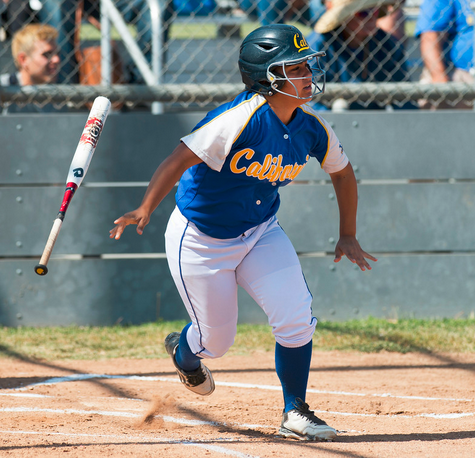 Softball
Santa Fe 13, Pioneer 5 — Alexandria Andrade was the winning pitcher, Jeanelle Medina went 5 for 5 with a double and Alexxis Ponce went 3 for 4 for the Chiefs (11-9, 4-1) in a Del Rio League win. Samantha Mancillas had a triple for Santa Fe. 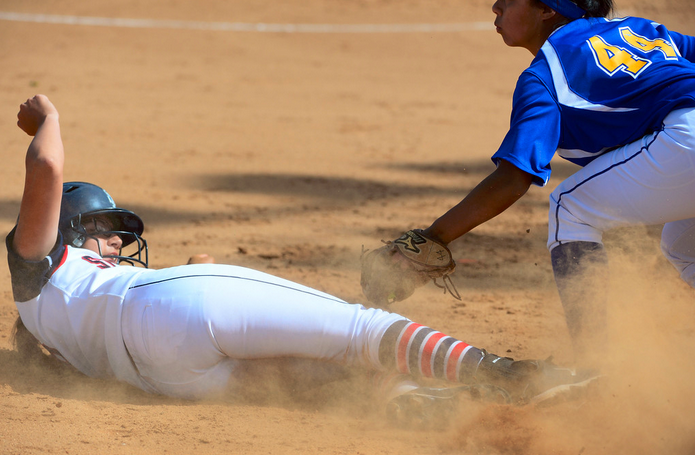 St. Paul’s Samantha Rivas safe at third base ahead of the tag by Bishop Amat third base Madeline Ramirez (44) in the first inning during a prep baseball game at Jersey Field in Santa Fe Springs, Calif., on Tuesday, April, 26 2016. (Photo by Keith Birmingham Pasadena Star-News)

By Stephen Ramirez
SANTA FE SPRINGS >>strong> Bishop Amat High School was in position to possibly clinch the Del Rey League softball title on Tuesday against rival St. Paul.The Swordsmen said no, not at their place.
Kayla Rivas had the go-ahead RBI in a three-run fourth inning and Emilee Leonard was steady in the circle to lead St. Paul to a 3-2 victory over Bishop Amat at Jersey Fields.

Leonard and Nia Carter also had RBIs in the fourth inning for St. Paul, which improved to 14-8 overall and into second place in league play at 5-3. Leonard gave up eight hits and struck out six.
Gabby Bracamonte went 3 for 4 with a RBI and Alyssa Barrera had a double and a triple and scored a run for Bishop Amat, which slipped to 17-3 and 7-1.
“It means a lot,” Rivas said. “If we didn’t win this, it would have been a whole different week next week. It meant a lot getting that hit (in the fourth) and the extra runs.”
The Lancers’ Samaria Diaz had given up one hit through the first three innings before the Swordsmen solved her in the fourth with fourth singles for a 3-1 lead.
The Swordsmen put runners on first and second with one out of a single by Samantha Rivas and a hit by pitch to Sydney Kreimann. Leonard then tied it 1 with a single to center field. Kayla Rivas and Nia Carter followed with back-to-back singles to center to push it to 3-1.
“I think we just competed more (in the fourth),” Kayla Rivas said. “We had more focus.”
Leonard then survived a scare in the seventh. Sophia Saucedo and Bracamonte had singles before a RBI groundout by Maddie Ramirez cut it to 3-2 with two outs. Leonard then induced Julia Valenzuela to pop out to end the game.
“(Leonard) did a great job of putting the ball low and outside,” said Bishop Amat coach Kristen Dedmon, whose Lancers had taken a 1-0 lead in the first on a triple by Barrera and a double by Bracamonte. “We struggled with it all game without making an adjustment. Our hitters will just move on from here knowing what we need to work on and come out Thursday ready to make those adjustments.”