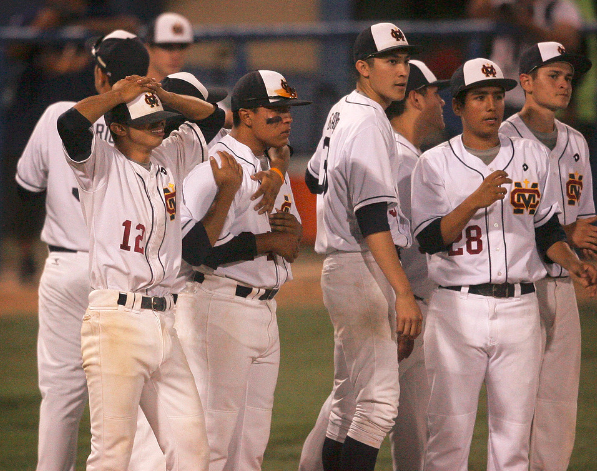 By Stephen Ramirez
RIVERSIDE >> Cantwell-Sacred Heart of Mary’s quest to win its first CIF Southern Section baseball title will have to wait for another year.

Branden Boissiere gave up one hit and struck out 10 in 5 2/3 innings to lead top seed Woodcrest Christian to an 11-0 victory over the Cardinals in the Division 5 championship game Saturday at UC Riverside.
Wesley Scott had three hits and two RBIs and David Garman had three hits and an RBI for the Royals, who finished 29-5. They scored their fourth title since 2000. Woodcrest Christian outscored its five playoff opponents 33-5.
CSHM, which was held to one hit, finished 28-4. The Cardinals, who were not seeded, were in a divisional final for the first time.
“We had a great season,” CSHM coach Larry Patino said. “We fought and fought and our boys showed up every game. I’d be lying if I said we had a good shot at winning this.
“We showed up, had maybe two good innings. Woodcrest Christian, we should really be talking about them. That team is amazing. They hit the snot out of the ball and Boissiere was dominant.”
Woodcrest Christian started quickly, getting three singles for a 1-0 lead in the first. Pitcher Andrew Quillen looked like he might get out of it, striking out Jordan Keller for the second out. But Garman followed with a ground-ball single to score Boissiere for the lead.
The Royals had four consecutive hits to push it to 4-0 in the fourth.
Garman led off with a single before scoring on a double to right-center field by Gabriel Ramos. Brandon Cody then made it 3-0 with a triple to left-center field before Justin Cross singled with the infield playing in for the four-run lead.
Boissiere took care of the rest. The sophomore, who finished the season 5-1 with an ERA under 1.00, gave up a double to Jared Thomas to start the game before retiring 12 of the next 13, finishing the first three innings with seven strikeouts while using 38 pitches.
He retired 10 consecutive batters before Elijah Vasquez walked with two outs in the fourth. Boissiere then induced Zachary Thomas to fly out.
Woodcrest Christian pushed it to 6-0 in the sixth. Cody and Evan Castillo had singles before Trevor Berl singled with two outs for a 5-0 advantage. Boissiere, who also had two hits and an RBI, followed with a bloop single to make it 6-0.
CSHM, which upset No. 2 seed Paraclete in the quarterfinals and beat Citrus Hill in the semifinals, had one look at the game. The Cardinals loaded the bases in the sixth on three walks, with the first two forcing Boissiere from the mound. But reliever Adam Zellers induced Zach Thomas to pop out to first to end the threat.
The Royals pushed it 11-0 in the seventh. Berl and Castillo had RBIs before Scott had a two-run double. The fifth run came in on a fielding error.
Woodcrest had 16 hits off three CSHM pitchers.
“We’ve talked about how we are a team of destiny,” Patino said. “Down 6-0, we loaded the bases. If it was God’s will, we get a base hit there and something good could have happened.
“We had a great season and our boys laid it on the line this year. But their pitching was amazing. They cut us up. We’ll have to go back to work. Getting here in my third year was a great accomplishment.”