Girls basketball
Whittier Christian 56, El Monte 41 — Joleen Corona had 15 points and five assists and Clairessa Watkins added 13 points and had six rebounds for the Heralds (2-0) in a nonleague contest. Also contributing to Whittier Christian’s victory were Christa Evans, who had 12 points and eight rebounds, and DaShell Vasquez, who had 11 points. 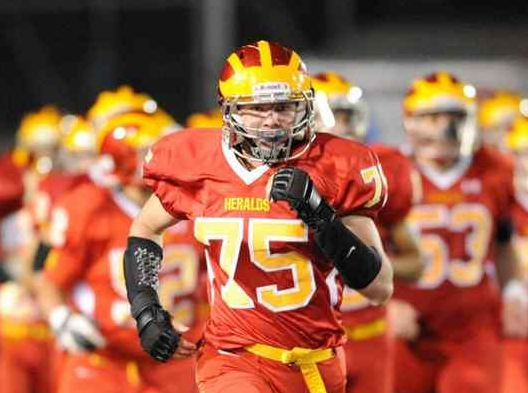 Ethan Hawks, who played football for Whittier Christian High School, died Thursday days after being struck by a piece of metal while riding as a passenger on the 57 freeway in Anaheim. Courtesy Ming Lin

By Hannah Madans
IRVINE >> Whittier Christian High School football defensive end Ethan Hawks died Thursday morning after a freeway accident Saturday, according to the Orange County coroner’s office.The boy, 17, was put in a medically induced coma at UC Irvine Medical Center after a piece of metal weighing 7 to 10 pounds went through the windshield of a car he was in. The car was traveling south on the 57 Freeway, south of Katella Avenue in Anaheim.
The metal sliced through his neck.
Hawks was riding in the front passenger seat of a Hyundai sedan driven by his mother, Kathleen Hawks, around 2:30 p.m. Saturday when the metal object either fell off a truck or was struck by another vehicle and launched into the air, California Highway Patrol Officer Florentino Olivera previously told this news organization.
Anyone with information about this incident can contact the CHP’s Santa Ana bureau at 714-567-6000.
Sergio Gradilla, head coach of the Heralds football team, previously described Hawks as a “tough young man.”
Last year, Hawks sustained a season-ending compound leg fracture during a game against Maranatha High School of Pasadena.
Many people believed Hawks, now a junior, would not play football again. Instead, several months later he was practicing again with teammates, Gradilla said.
He started for the Heralds this season.
Gradilla described Hawks as outgoing and said he enjoyed making his teammates laugh.
“He is always cracking jokes,” Gradilla said. “He just wants to have great time with everybody.”
Whittier Christian established a GoFundMe account for donations to help Hawks family after the accident.
Staff writer Scott Schwebke contributed to this report. 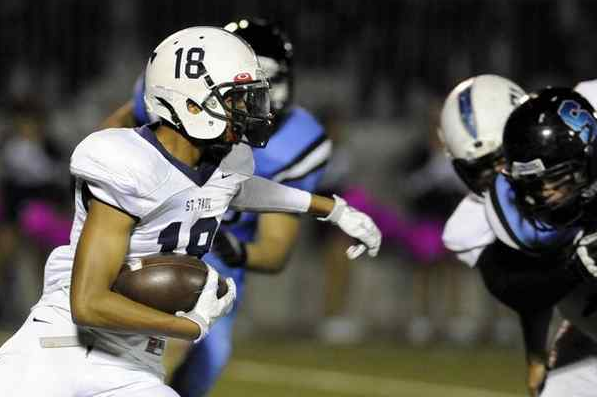 By Stephen Ramirez
Fifty-two teams have the pleasure to practice on Thanksgiving.It’s a season-long goal of most every team in the CIF Southern Section. For some, it’s not a new experience. But for others, it’s a either a first-time affair, or it’s been a long time since having the pleasure.St. Paul sits in the latter category. The Swordsmen (6-6), who travel to Norte Vista (10-2) in Riverside for a Division 7 semifinal at 7:30 p.m. on Friday, are in the semifinals for the first time since winning the Western Division in 2007. They are in this position partially due to Nick Redick, who has turned it on down the stretch to key their magical run.
The senior also understands what this playoff stretch has meant to the school and the program, which has transformed from being 1-9 in 2013 to 5-5 last season and the playoffs this fall.
“All the support we’ve been getting, from the alumni and fans, it’s been good,” Redick said. “For us to end this drought, it’s been needed to pick the school back up.”
And Redick has done his part. He has rushed for 916 yards and 12 touchdowns to spearhead the Swordsmen’s attack, helping St. Paul to a third-place finish in the tough Angelus League before scoring consecutive playoff wins over Monrovia (54-42) and No. 1 Oxnard Pacifica (28-21).
“Nick has been very mature and focused student-athlete,” St. Paul coach Rick Zepeda said. “He really doesn’t show a lot of emotion. When he gets on the field, you know he has some fortitude.
“He’s really played hard. I’ve loved his consistency as a player and a student. He’s been a player for us to lean on throughout the year.”
Redick started his high school career at St. John Bosco, but the lure of being a Swordsmen was too strong and he wound up at the Santa Fe Springs school prior to his sophomore season. He wears his sword proudly.
“Before my freshman year, St. Paul and St. John Bosco were the schools I was considering,” Redick said. “My mom wanted me to go to Bosco, because of the experience. I went there, but I still wanted to come to St. Paul, so she let me transfer out.
“This is where my friends are. This was the school I’ve always wanted to go to.”
St. Paul has reaped the fruits of that decision. Redick has been the key to this season’s success, although his season has mirrored St. Paul’s up and down and back up season. He had a solid start, but was slowed by injuries during the early part of the league season before showing his worth late, once healthy.
“When he got hurt, he just rehabbed and got himself back out here,” Zepeda said. “He got dinged a bit (last week), but he got himself back in the game. Those are the intangibles of a great high school (player and team). Those players that are not selfish, but keep pushing and help the team win.”
Redick’s contribution has been key during the playoffs. He helped the Swordsmen rally for the win at Monrovia in the first round, rushing for 168 yards and four touchdowns. He then supplied 68 yards in last week’s win over Pacifica.
“The offensive line has been a big help for me,” Redick said. “They’ve improved every game. They are doing their job, helping me out.”
Now Redick and the Swordsmen look to continue it two more weeks, first on Friday at Norte Vista.
“It’s been a good vibe for the school, the run we’re on,” Redick said. “We’re hot right now. We want to feed off it, keep playing good and doing what we are doing.”
And Redick will likely be in the middle.