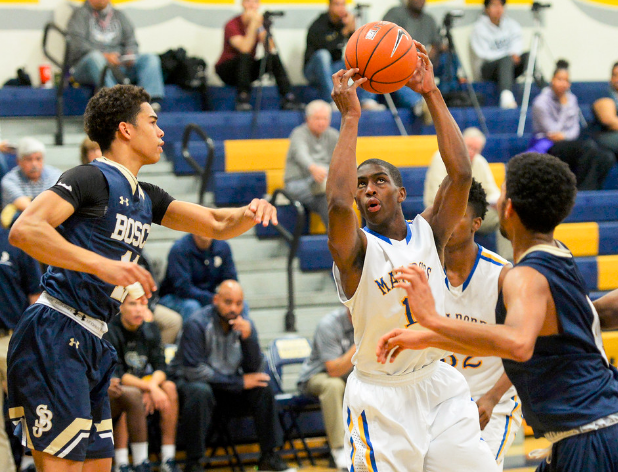 LA HABRA — There were a lot of questions for the La Mirada High School boys basketball team entering the season. But the Matadores, two years removed from winning a CIF State Division II title and winners of the past two Suburban League crowns, had all the answers Friday.
Shemar Morrow scored 17 points and Rendwick Helaire and Brian Askew had 14 each as La Mirada advanced to the North Orange County Tournament final with a 71-62 victory over St. John Bosco at Sonora High School.
Nick Colosi also had 10 points for La Mirada (7-2), which will face either host Sonora or Capistrano Valley for the championship at 7:30 p.m. today.
JJ Watson had 26 points for Bosco (6-2), which is ranked No. 9 in this week’s CIF Southern Section Division 1AA poll. The Braves will face the Sonora-Capo Valley loser for third place at 6 p.m.

La Mirada, after surviving a quick start from Bosco in the third quarter, solidified the win with a 16-5 blitz over a 5-minute stretch during the end of the third quarter and the beginning of the fourth to go up 57-46.
Morrow had consecutive fast-break layins for a 47-41 lead after three quarters, and La Mirada opened the fourth with a 7-3 surge for a 57-46 lead following a 3-point play by Daniel Cabrera (six points) and a 3-pointer by Askew.
Bosco cut the lead to 60-56 with 1:55 left before La Mirada made nine of 10 free throws down the stretch to secure the victory.
La Mirada coach Bryce Jones: “We said going into the season that we are going to win games we probably shouldn’t win and lose games we shouldn’t,” La Mirada coach Bryce Jones said. “We’re up and down. Tonight, we were up. St. John Bosco is a very good, very well-coached team. For us to compete at (this) level is good. (Helaire and Morrow’s) physicality led us, and our guard play was solid.”
— Stephen Ramirez