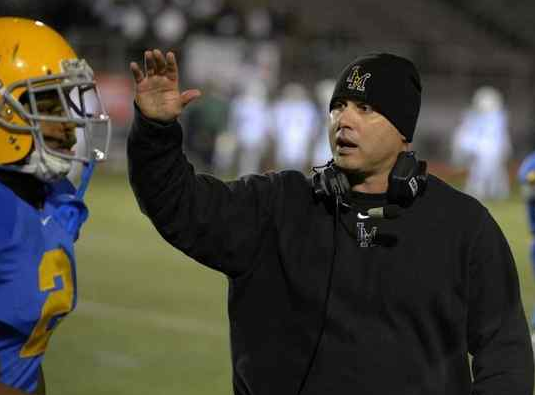 By Aram Tolegian
Mike Moschetti, the hometown boy who took La Mirada High School’s football program from being one of the best in the area to one of the best in Southern California, resigned on Tuesday in a move that came as a shock to many.Moschetti walks away just a year after guiding La Mirada to a state regional bowl championship. The Matadores reached the CIF Southern Section Division 3 championship game this season before falling to Edison.“There just comes a point where it’s just time for a change in leadership,” Moschetti said. “It will be good for me, it will be good for the school. I’ve been here nine years and sometimes your spiel gets old, saying the same things over and over to the kids.“It hit me walking off the field after we got beat (by Edison) that it was just time for me to not coach at La Mirada anymore.”
There’s speculation that with high-paying glamour jobs now open at JSerra and other schools, Moschetti may be setting up for a jump to Division 1. But that’s something the 41-year-old known for speaking his mind and taking on all comers somewhat ruled out.
“I think eventually, some day, I’ll come back and coach,” Moschetti said. “I’ve been approached before by private schools, but I grew up in La Mirada and played in La Mirada, and no matter how much money was involved, it was something where I could never see myself coaching at one of those schools.
“The challenge was to do something special at the high school (level). That was the goal and the challenge, to do something special here. Anybody can win at Bosco (St. John Bosco). Anybody can win at Servite. I think it’s tougher to win at a little public school like La Mirada, that has under 2,100 students with no money and a tiny little weight room. That’s always been intriguing to me; the challenge to win where guys say you can’t.”
As a student at La Mirada, Moschetti was a two-sport standout in baseball and football. As a quarterback, some would say he won the 1992 CIF championship almost single handed. After graduating in 1993, he led the Mt. San Antonio College football team to the state title in 1997.
Moschetti continued to play both sports, but rose to further fame while playing quarterback at Colorado.
As a coach, Moschetti helped guide his alma mater to a CIF-SS Southern Division championship in 2009. He then caught the ire of some area fans when La Mirada began making videos for social media of the different uniform combinations its players would wear. After some earlier-than-expected postseason exits, some fans felt La Mirada spent too much time concentrating on how it looked and not winning games.
And yet no matter what La Mirada did in the playoffs, Moschetti’s program was as good as any in terms of getting its players scholarships to play at the next level. Lots of scholarships — and often to big-time universities. Since Moschetti took over in 2008, 44 former La Mirada players have gone on to play college football. The Matadores will add to that number again this February.
“The proudest moments that I have, not only me, but the rest of our coaching staff, is on Signing Day,” Moschetti said. “Seeing the kids sign and families taking pictures. We’ve had a lot of kids over the years sign. Sometimes you look back and wish you could’ve done more because there were some kids who didn’t end up signing and fulfilling their dream.
“But that’s what makes me tick, seeing kids go to the next level and get a master’s degree and coming out debt free because it was all paid for.”
Moschetti also threw caution to the wind in terms of scheduling. He beefed up La Mirada’s nonleague schedule so it was one of the toughest around. And while many observers openly scoffed at the notion of La Mirada banging heads with Mater Dei and St. John Bosco, what got lost in the shuffle is the amount of top programs that Moschetti’s teams actually beat.
During Moschetti’s nine seasons, La Mirada posted wins over San Clemente, Charter Oak, La Habra, La Serna, Tesoro, Orange Lutheran, St. Francis and St. Paul, among others. His overall record was 78-34, including seven Suburban League championships. It had been 10 years since La Mirada won a league title in 2009.
It all culminated with 2015’s historic run. The Matadores won the Southeast Division championship, then won regional and state bowl championship games to finish 13-3. The momentum carried over into this season with La Mirada finally delivering Moschetti the win over a Trinity League team he so badly desired as the Matadores topped Orange Lutheran in Week 0.
La Mirada also beat San Clemente, which later won the Division 2 championship and is playing for a state bowl championship this weekend. The Matadores were heavy favorites to win Division 3, but lost at home to Edison in the championship game on Dec. 2. 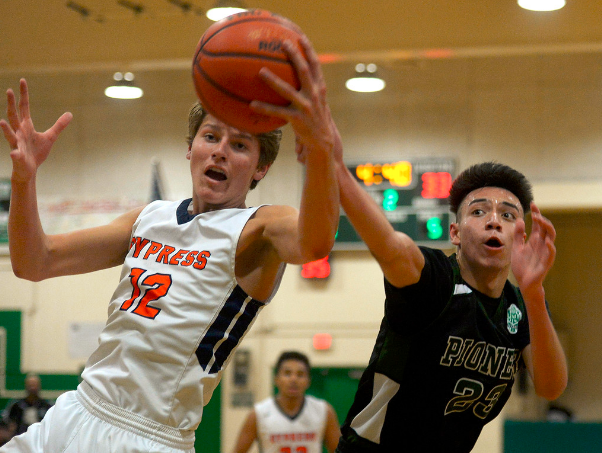 Pioneer’s Brandon Rivera (23) goes for the rebound against Cypress’ Erik poke (12) in the first half of a prep basketball game at Pioneer High School in Whittier, Calif., on Wednesday, Dec. 14, 2016. (Photo by Keith Birmingham, Pasadena Star-News/SCNG)

By Stephen Ramirez
WHITTIER — Pioneer High School believes its Del Rio League boys basketball title two years ago was more of the start of a winning trend than an aberration, and the Titans have showed it so far this season, winning their first six games.
The streak was stopped Wednesday, but Pioneer showed it’s a tough out after pushing Cypress to overtime before losing, 82-71, in a Pioneer Titan Pride Classic quarterfinal game at Pioneer High.
Erik Papke scored 29 points and Myles Jones had 15 for the Centurions (5-3), who will face either Los Altos or Cerritos Valley Christian in Friday’s semifinals at 7:30 p.m.

Khieem Williams had 22 points and Mike Vasquez scored 21 for the Titans, who will play the Los Altos-Valley Christian loser in a fifth-place semifinal at 4:30 on Friday.
Pioneer looked like it might keep its winning streak going after rallying from an 18-point deficit and taking a 66-64 lead with 21 seconds left in regulation on a 3-pointer by Vasquez.
But Marcus Swain (13 points) hit an off-balance jumper from six feet with four seconds left to force overtime.
Papke, who had 18 points in the second half, and Jones took it from there. The duo combined for 11 points in the extra period as Cypress outscored Pioneer, 16-5, to advance.
Pioneer’s Mike Vasquez: “We’re just trying to perform to the best of our abilities each game. We have to play with our hearts and hopefully, come out ahead. Even though we started slow (Wednesday), we never gave up. We tried our best and we came up short.”

Girls soccer
California 4, Pacifica Garden Grove 1; California 2, Crescenta Valley 1 — Brianna Saldana scored twice, Megan Martinez had two assists and goalie Becca Lindsay had five saves to lead the Condors, who won their first game at the Best in the West Tournament. Also for California, Lexi Magana and Viviana Ramirez each scored a goal.
Saldana and Elvia Villagomez each scored to lead the Condors (3-0-2) to their second win of the Best in the West Tournament. Saldana also had an assist, Jordyn Barber had an assist and goalie Lindsay had five saves.