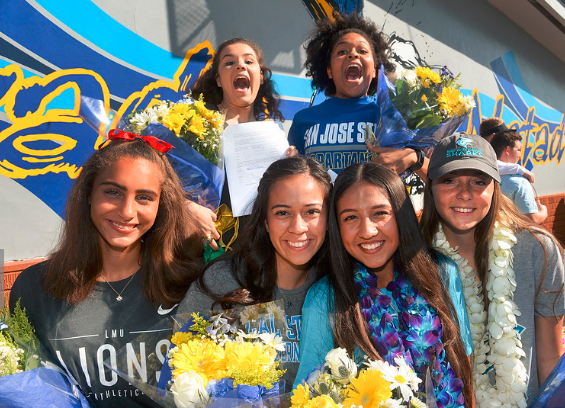 La Mirada, which was 10-4-2 overall and 7-0 in the Suburban League before hosting Mayfair on Wednesday, won the CIF Southern Section Division 4 titles the past two seasons. The Matadores also won a CIF State regional crown.
Handy and Hurtado catapulted that success into receiving Division I college scholarships.
“What I love about San Jose State is that were all kind of connected,” Hurtado said. “It’s a family. It’s going to be amazing to be there.
“The team and the coach are the main reasons why I want to go there. “
Handy also will get to play Division I college soccer, but has the added advantage of playing close to home, where her family and friends will get to see her play.
“I’m really excited to play at Loyola Marymount University,” Handy said. “I love the people; I love the school. I’ve met a couple of people there, and it sounds like a really great place to be. I’m really excited to be able to go there.”
Rios was one of the top baseball players in the area last spring and helped the Cardinals reach the CIF-SS divisional finals.
Zener is a two-time All-Area player for the Highlanders.