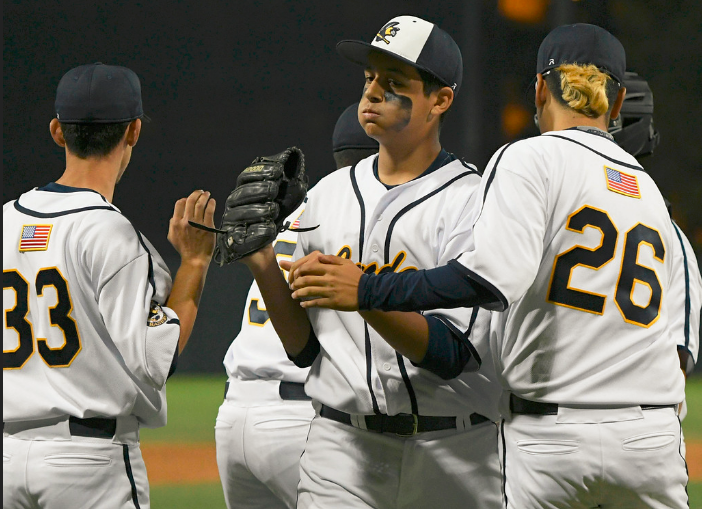 By Stephen Ramirez
LOS ANGELES >> The California and La Canada high school baseball teams may have played in a big college stadium Wednesday, but it was littleball which proved to be the difference.And the pitching of sophomore Mike Gutierrez didn’t hurt the Condors, either.Gutierrez threw six shutout innings and Jordan Zuniga converted a squeeze punt to perfection to lead California to a 1-0 victory over the Spartans in a nonleague game at USC’s Dedeaux Field.Gilbert Lopez and Brandon Acosta also had hits for the Condors (5-2), who head into Del Rio League play after winning last week’s El Segundo Blue Division Tournament and beating a La Canada team that is expected to challenge for the Rio Hondo League crown.
Graham Massimino had two hits and Connor Buchanan gave up two hits and struck out two in six innings for the Spartans (4-3).

“It’s been our script all through the years: Pitching and defense,” California coach Tony Nieto said. “We got a great outing from our sophomore, Mike Gutierrez. He gutted it out. His pitch count went a little high, but he wanted to get that last out (in the sixth) and he said, ‘I got it, coach.’ We left him in there and he got a big strikeout for us.”
Zuniga then capped one of the Cal’s two scoring chances with his sacrifice bunt for a 1-0 lead in the fifth.
Niko De Lao led off with walk. Noah Nieto sacrificed him to second and De Lao stole third. He scored when Zungia converted with a bunt to the right, forcing Buchanan to get the out at first.
“No pressure,” Zuniga said. “We do it at practice every day. You just have to get it done for the team. I tried to put us on top, and I did.’
Gutierrez took care of the rest.
The sophomore gave up two hits during the first two innings, but then rebounded to retire eight consecutive batters. He gave up a one-out double to Massimino in the fifth, erasing the La Canada catcher with a pickoff.
La Canada also had runners on first and second in the sixth with one out. But Gutierrez ended the threat when Buchanan flied out to right field and then struck out Tyler Fierro.
“In those situations, I’m just trying to get a groundball,” said Gutierrez, who threw 95 pitches in six innings. “The defense was outstanding today. I was just trying to get a ground ball and get out of the inning.”
Anthony Salazar replaced Gutierrez in the seventh. Tristan Kalnins led off with a walk, but Salazar got the next three batters in the Condors’ annual game at Dedeaux Field.
“It’s an honor to pitch here,” Gutierrez said. “All the history that’s been here at USC. It’s just an honor.”

Baseball
Whittier Christian 9, La Quinta 2 — Chad Green was the winning pitcher and Matt Salas went 4 for 4 with a triple and three RBIs for the Heralds in a Newport Elks Tournament win. Also for Whittier Christian, Julian Gonzalez went 2 for 3 with an RBI and Josh Hernandez had a triple.

Baseball
Whittier Christian 10, Dominguez 0 — Brian Greene pitched four innings, striking our four and Dillon Crain pitched the final three innings, striking our three for the Heralds in a Newport Elks Tournament victory. Also for Whittier Christian, Matt Salas went 3 for 4 with a double and a triple, Elijah Camarena went 2 for 3 and Brian Greene went 2 for 2 with a double. 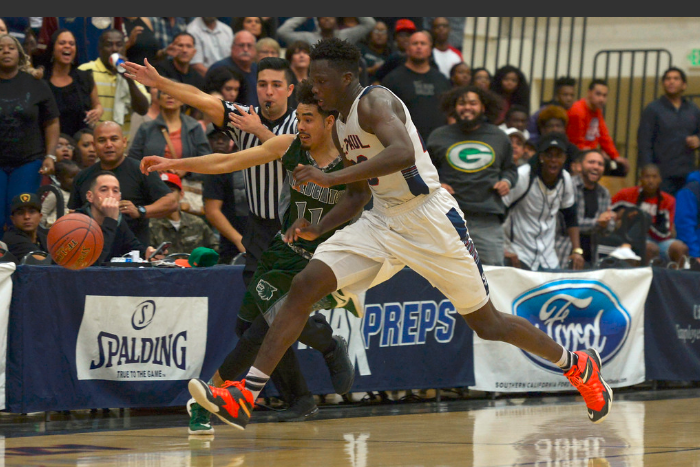 Twentynine Palms’ Javier Soriano (11) fights for the loose ball against St. Paul’s Louis Bangai (C) (20) in the second half of a CIF-SS Division 3A Championship basketball game at the Felix Event Center on the west campus of Azusa Pacific University in Azusa, Calif., on Saturday, March, 04, 2017. Twentynine Palms won 70-68 in overtime. (Photo by Keith Birmingham, Pasadena Star-News/SCNG)

By Stephen Ramirez
AZUSA — Twentynine Palms High School didn’t take the easy route to winning its second CIF Southern Section boys basketball title.
But accomplishing it by knocking off the top two seeds in the division made it that more rewarding for the Wildcats, who outlasted No. 2 St. Paul to score a 70-68 victory in overtime Saturday in the Division 3A title game at Azusa Pacific University’s Felix Event Center.
DShaun Barrett scored 29 points and Adam Bell had 17 for Twentynine Palms (28-3). Louis Bangai had 26 points and 16 rebounds to lead the Swordsmen (27-6). Nate Kasongo and Kylann Mann added 21 and 19 points, respectively, for St. Paul.
Both teams have already qualified for the CIF State playoffs, which begin next week. Pairings will be released Sunday.
St. Paul, which was seeking its first divisional crown since beating Twentynine Palms in 1997, had a chance to send it to a second overtime, but Bangai’s inside shot rolled off the rim as time expired.
“We’ve preached all season about getting one stop,” said coach TJ Stanford, whose Wildcats knocked off No. 1 Hesperia in the semifinals. “We got that one stop.

“We’ve talked about climbing the mountain and we climbed the mountain (in beating the top two seeds). I couldn’t have picked a better group of guys to take this journey with. We’re at the top of the mountain.”
St. Paul nearly pushed the Wildcats off.
The Swordsmen rallied from eight points down in the fourth quarter to force overtime, then after giving up a three-point play by Barrett to begin the extra period, they rallied again and had a chance to continue the game.
Point guard Alfredo Reyes, who took the Swordsmen’s football team to the semifinals, got the ball on the block to Bangai. But the senior center’s short attempt slid off the rim. He got the rebound but his second attempt, which also missed, was late.
“I got the shot off,” Bangai said. “It went around the rim twice and fell off. I don’t understand it. I don’t know how to describe it. It’s just basketball, I guess.”
Up until that point, it was scrappy defense by the Wildcats.
Bangai bettered his playoff average of 25 points a game, but the Twentynine Palms’ quick defenders made him work for each one. The Wildcats’ athleticism also helped key an 11-4 run to begin the fourth quarter that had the Wildcats thinking title at 59-51. They forced 23 turnovers.
“That was our game plan, to use our speed,” Barrett said. “We practiced it all week.”
But St. Paul refused to cave and countered with a 12-4 surge to tie it at 63 with 58 seconds in regulation. Neither team could score down the stretch.
“A basketball game is one where you just have to keep fighting,” Bangai said. “We did. We just tried our best to win the game.”
Barrett opened the overtime period with his three-point play for a 66-63 lead. St. Paul closed to within one on two free throws by Bangai, and after a missed free throw had a chance to tie it with 18 seconds left. But the opportunity rolled off the rim.
“Our goal is to go to Sacramento (for the state finals),” St. Paul coach Damaine Powell said. “We have a little pain. We’ll let it settle, then on Monday begin our new goal and new journey.” 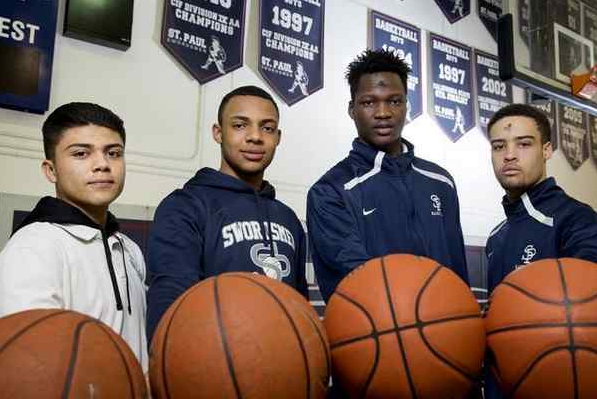 By Stephen Ramirez
SANTA FE SPRINGS >> St. Paul High School is no stranger to making deep postseason basketball runs.But this time, it’s the boys team that’s creating the buzz at the Santa Fe Springs school.The Swordsmen, a program that had been mostly dormant over the past two decades, is suddenly alive and well. They have prospered over the past two seasons under coach Damaine Powell, who has brought in a nucleus that has St. Paul on the brink of its first CIF Southern Section title in 20 seasons and playing for its first crown since 2001.Senior Louis Bangai, considered one of the top inside players in the Section, is the leader, but St. Paul’s run to Saturday’s Division 3A title game against Twentynine Palms at Azusa Pacific has been keyed by its cohesiveness, which also includes seniors Kylann Mann, a transfer from St. Bernard, and Alfred Reyes, and junior transfer Nate Kasongo, who came to Santa Fe Springs from Switzerland.The fifth starter has been forward Chris Garcia.

“It’s a big transition,” Mann said. “My team last year was so anti-social. We never hung out like this team does. I think that’s a big reason why we are in the championship (game). We’re really close as a team.
“It’s nice to be on a loving team instead of one, where I don’t even know half my teammates. I feel that’s a big part why we’re here.”
Another is Bangai, who at 6-foot-10 is a tough nut to crack for opposing defenses. He’s shown his ability during the playoffs, averaging 25 points a game, including putting up 32 in a 61-60 victory at Lompoc Cabrillo in the quarterfinals. He fought through foul trouble to score 22 with eight rebounds in leading the Swordsmen to a 56-52 win over San Bernardino in the semifinals.
“I’m just trying to get better,” said Bangai, a three-star player who has been linked to some Western Athletic Conference schools, including UNLV. “I’m trying to work hard every time I come in the gym, for practice and the games. I want to play with the (mind set) of being a winner.”
He’s done that, and it hasn’t gone unnoticed.
“I’m proud of his amazing development in one year’s time from last year,” Powell said. “He has made tremendous strides. He’s a totally different player than last year.
“He’s our best player on offense and best player on defense. He’s the reason we made it this far.”
But he’s not the only reason. The Swordsmen, with the additions of Mann and Kasongo are a much deeper group than the unit that won the Santa Fe League and advanced two rounds in the playoffs. These group has more scoring options, which puts more pressure on the defense in trying to limit Bangai.
Kasongo has shown an ability to score inside and outside during the playoffs, putting 14 against Eastside in the second round and 17 against San Bernardino in the semifinals. Mann, who also is productive inside and out, had 12 and 13 points in those two games. Both were keys in the semifinals to help hold off San Bernardino while Bangai was on the bench with four fouls early in the fourth quarter.
“(Kylann’s) a born leader and a born winner,” Powell said. “He does it all for us from handling the ball shooting threes.
(Kasongo) has grown rapidly from the beginning of the year. As his confidence grew, so did his game. He’s plays four positions for us and has the best instinct and feel for the game of anyone on our team.”
Kasongo has done it while not only transitioning to a new team, but a new culture, coming from Switzerland. “It’s a big change for me,” Kasongo said. “I’m from Switzerland, so basketball is not the same here. We are like a family. I’ve never had a team like this before.
“I think that’s why we are successful, because we are so close.”
Reyes, the point guard, has provided a leadership role, and has a charismatic skill that can’t be measured statistically. But he’s brought a sense of winning from the football team, where he was quarterback and helped lead the Swordsmen to their first semifinal appearance in a decade.
“It’s great to come to basketball after football,” Reyes said. “I want a ring. Football, I didn’t get a ring, so I’m trying to get one for basketball.
“I give my heart to this team. I trust in them and I know they trust me. I just try to do the best I can for the team.”
Now the Swordsmen, in the title game for just the third time, hope to finish the job and bring home the school’s first title in 20 seasons.
“If we can win, it’s going to be so big for the school,” Bangai said. “It’s going to be exciting for everybody. Everyone (at the school) seems to be talking about it all this week. We’re going to do our best to get that title and bring it home.”