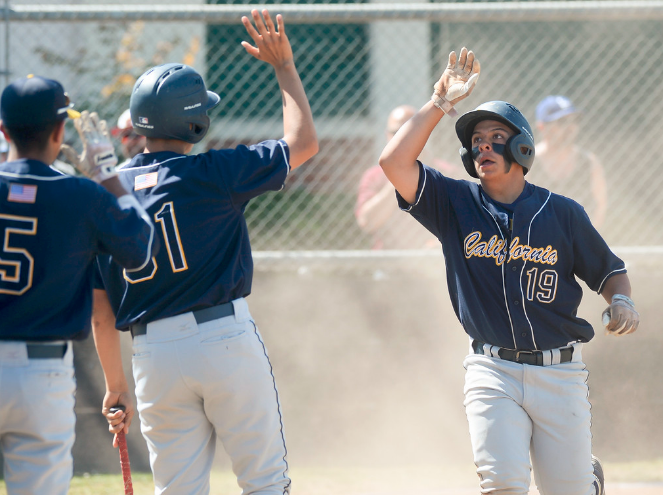 By Stephen Ramirez
SANTA FE SPRINGS >> California High School’s quest for a sixth consecutive Del Rio League baseball crown is still alive and well.The Condors drew their line in the sand by rallying back from a tough loss on Wednesday to score a 7-4 victory over first-pace Santa Fe on Friday.Gilly Rodriguez had a key two-run double in the second inning and Gilbert Lopez gave up one run in five innings to lead California (13-7, 6-3), which stayed within a game of the Chiefs. Raul Ramirez had three hits for Santa Fe (11-11, 7-2), which faces a home-and-home series with La Serna (12-12-1, 6-3) next week. The Lancers lost to Whittier to stay tied for second with California.

“I think more importantly to us as a ball club, we showed we have the capability to beat anyone in this league,” California coach Tony Nieto said. “Regardless of (what the standings show), we still have six games left. It was more important for our ball club to understand that we can beat anybody.”
California, which lost 5-0 to Santa Fe on Wednesday, jumped on the Chiefs early on Friday, leading 5-0 after two innings. The Condors took a 2-0 lead in the first. Jacob Sharp and Brandon Acosta (two hits, two runs) singled with one out. Sharp then stole third before scoring on an error. Acosta came home on a squeeze bunt by Lopez.
Jordan Zuniga led off the second with a single before scoring on a fielder’s choice and throwing error. Rodriguez doubled in two runs for a 5-0 advantage.
“That at-bat, I was just trying to go the other way with it,” Rodriguez said. “He hung the curve ball, and I went (to right field) and got a double.”
Lopez kept Santa Fe at bay early, allowing just one unearned run in five innings. He gave up five hits and struck out three.
California made it 6-0 in the third on a single by Lopez and a balk before going up 7-0 on a hit-by-pitch, a stolen base and error in the fifth.
But Santa Fe, which scored five runs late to win on Wednesday, refused to quit. Ramirez hit a two-out triple to make it 7-1 in the fifth before the Chiefs made it 7-3 in the sixth on a RBI single by Ruben Romero and an error.
Ramirez hit a double in the seventh before a fielding error made it 7-4. But Anthony Salazar induced Nathaniel Davalos to fly out to end the game.
“We gave in a little bit early with letting (being in first) get to us. We came in a little too laid back,” Santa Fe coach Pierre Romo said. “It affected us and we got down on ourselves. But we continued to fight.
“We took the (season series 2-1). It’s not a great day, but we’re still in a good place. That’s what we are looking at.”