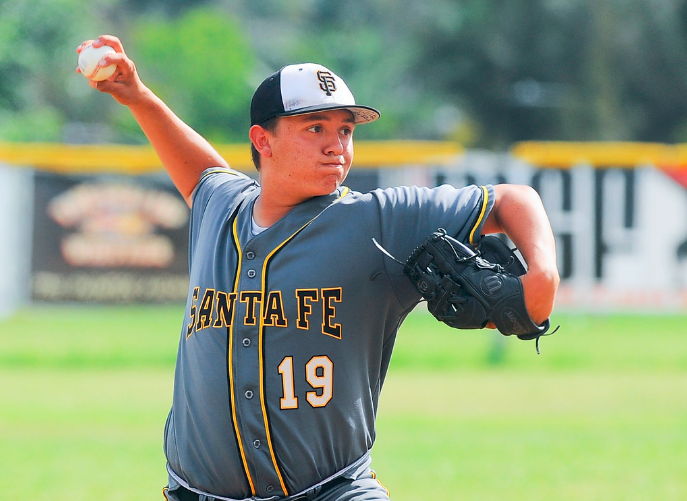 By Stephen Ramirez
@SteveRRamirez on Twitter
WHITTIER >> La Serna High School got the best of Santa Fe earlier this baseball season and pitcher Isaiah Gonzales was determined it wouldn’t happen again.He was true to his word on Wednesday.Gonzales pitched a six-hit shutout and the Chiefs took advantage of four La Serna errors to solidify their lead in the Del Rio League with a 3-0 victory over the host Lancers.
Santa Fe (13-12, 8-2), which shared the league crown with California last season, moved two games ahead of La Serna (12-13-1) and a game ahead of Cal (14-7, 7-3), which beat El Rancho 7-2 in its chase for back-to-back titles.
Anthony Montes had a RBI double for the Chiefs. Abraham Carrillo was the hard-luck loser for La Serna, giving up three hits and striking out five in 5 1/3 innings. Nick Martinez also had two singles for La Serna.

“This was very big, because the first we game we played (against them) they gave it to us,” Gonzales said of La Serna’s 12-2 win on March 24. “They are a good ball club, but today we came out with more fire and it lit a spark under us.
“You always want to win, but because of that first game, we wanted this game the most.”
Santa Fe, which split two with Cal last week, took the early lead by taking advantage of two La Serna errors in the second.
Alonso Guzman reached on a dropped pop up with one out. Montes then lined a RBI double to right-center field for a 1-0 lead. He advanced to third on the throw home. Montes scored on an errant pick-off attempt for a 2-0 edge.
“(Carrillo) pitched great,” La Serna coach Anthony Gonzales said. “He’s done it all year for us. He put us in position to win, but we have to step up for him one time.
“We did make errors, but I like how we rebounded. You have to tip your cap to Gonzales. We beat him the last time and he came back today.”
Isaiah Gonzales was solid, giving up the six hits and striking out five. He allowed just two runners to reach third base and three to advance to second. He got out of both situations before closing the game by retiring seven of the final eight batters, with the exception reaching on an error.
La Serna’s only two looks at the game came in the third and the fifth. In the third, the Lancers put runners on first and third with one out following a single by Jacob Mora.
But Gonzales induced Eli Martinez to hit into a double play to end the threat.
The Lancers had runners on second and third with two outs in the fifth before Gonzales got Mora to pop out.
Gonzales had a single and scored in the sixth for a 3-0 lead.
(Gonzales) is a big-game pitcher,” Santa Fe coach Pierre Romo said. “He keeps proving it. He did it last week and he did it today.”
The two teams complete their season series on Friday at Santa Fe.