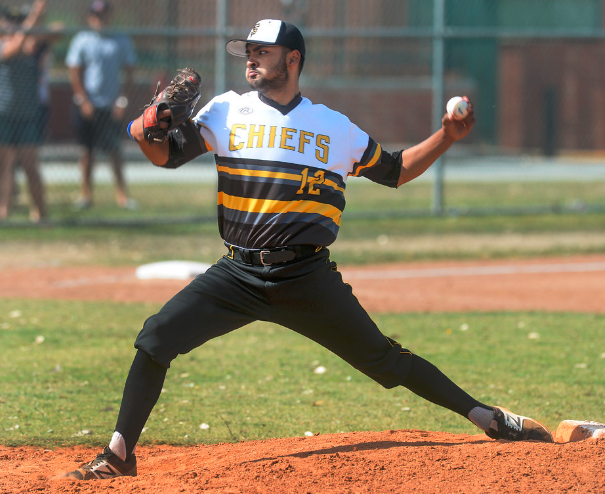 By Stephen Ramirez
SANTA FE SPRINGS >> Santa Fe High School, with five regulars hitting above .300, is one of the better hitting teams in the Del Rio League. But the Chiefs ended the week atop the league baseball standings due to their pitching.Alfredo Ruiz and Jonathan Fuentes combined to pitch Santa Fe’s second consecutive shutout, leading the Chiefs to a 3-0 victory over La Serna on Friday at Santa Fe High.
Isaiah Gonzales tossed a six-hit shutout over the Lancers on Wednesday.
Ruiz threw six scoreless innings and struck out nine for Santa Fe (14-12, 9-2), which leads California (15-7, 8-3) by one game and La Serna (12-14-1, 6-5) by three.
The Lancers’ Luke Garcia had three hits and Andrew Arguello gave up four hits and struck out five in six innings.
Santa Fe, which scored two unearned runs in a 3-0 win over La Serna on Wednesday, took a 2-0 lead in the second. The Chiefs loaded the bases on a hit-by-pitch to Anthony Montes and consecutive singles by Erick Espinoza and Ruben Romero. Sergio Medrano was then hit by a pitch for a 1-0 lead before Jorge Centeno hit into a fielder’s choice for a 2-0 lead.
Alonso Guzman homered in the third for a 3-0 advantage.
Ruiz got in a little trouble in the fifth and sixth, but pitched his way out of it. Richie Perez doubled with one out, but was left at third after Ruiz induced Jacob Mora to line out to right field before striking out Eli Martinez.
Josh Valdez doubled and Nick Martinez singled with two out in the sixth, but Ruiz struck out Diego Perez.

Santa Fe coach Pierre Romo: “Alfredo bounced back after a rough start last week (against Cal). The kid had the mind set he wasn’t going to let it happen again. He knew what he was going to do and came out and pitched a gem.”
La Serna coach Anthony Gonzales: “It’s just baseball. We didn’t give it to them. They earned it. Arguello pitched a great game. Ruiz battled all game and got us out when he needed to.”
Santa Fe’s Alfredo Ruiz: “I felt pretty good today. The fastball was working good. My junk wasn’t working, but I stuck with the fastball and my team backed me up with runs. That gave me the momentum, so I felt good today.”
OTHER DEL RIO LEAGUE SCORES
Cal 9, El Rancho 6
Whittier 5, Pioneer 3
STANDINGS
1. Santa Fe 9-2
2. Cal 8-3
3. La Serna 6-5
3. Whittier 6-5
5. El Rancho 4-7
6. Pioneer 0-10
Notes: Title race is down to Santa Fe and Cal. Chiefs close with Pioneer and El Rancho; Cal has has La Serna and Whittier.
ALMONT LEAGUE
FRIDAY’S SCORES
Schurr 12, Alhambra 11 (8 inn)
Montebello 14, Keppel 0
San Gabriel 12, Bell Gardens 0
STANDINGS
1. Montebello 8-3
2. Alhambra 7-4
3. Schurr 7-4
4. Keppel 5-5
5. San Gabriel 4-5
6. Bell Gardens 1-10
Notes: Montebello faces Alhambra twice next week, which could solidify the title for the Oilers, or make it more complicated, if Alhambra pulls the sweep. Stay tuned.

OTHER AREA NOTES: Cantwell-Sacred Heart of Mary leads the Camino Real League by two games over Bishop Montgomery. The two face each other twice on May 8 and 10….La Mirada routed Norwalk, 17-0, to improve to 19-4 overall and 8-0 in the Suburban League. They face second-place Mayfair (7-1) twice next week.