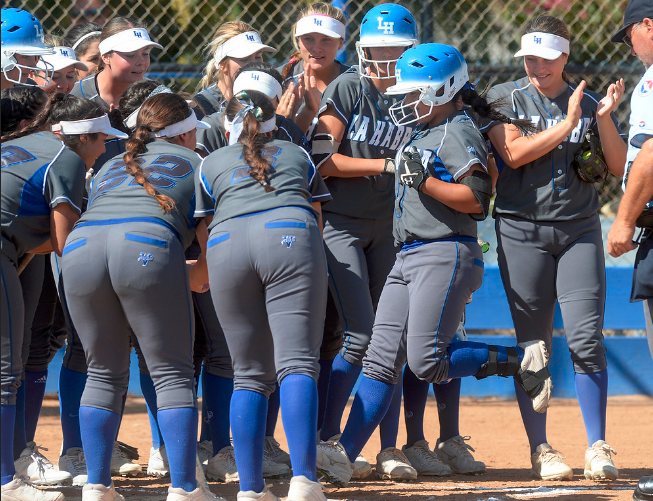 La Habra continues quest for CIF-SS softball title. Will the Highlanders celebrate like this? (Photo by Keith Durflinger/Whittier Daily News/SCNG)

CIF-SS SOFTBALL PLAYOFFS
SECOND ROUND
Division 1
La Habra (20-7) at Corona Santiago (23-6) >> The Highlanders, who were ranked in the state Top 10 by CalHiSports earlier in the season, have recaptured their old swagger recently, routing Sunny Hills to end the regular season and scoring an easy 9-3 win over Yorba Linda in the first round.
They are led first baseman/pitcher Janelle Rodriguez, outfielder Kira Cauley and pitcher Hannah Johnson.
The Sharks won at Yucaipa in the first round.
Division 3
La Mirada (22-8-1) at Patriot (24-4) >> The Matadores are coming off a 14-1 win over Irvine in the first round.
They feature one of the division’s better hitting teams, led by junior third baseman Madison Bogdanovich, who had a three-run home run in the first round and Djhane Valido, who had three hits against Irvine.
Patriot defeated Summit 4-3 in the first round.
Division 4
Whittier (16-8-1) at Beaumont (19-8) >> The Cardinals are in the playoffs for just the second time since 2009 when they also advanced to the second round.
Whittier, which won at Mira Costa (10-6) in the first round, is led by junior Amy Bretado (.351, 13 RBIs).
Beaumont advanced with a wild-card win over Palm Springs (10-2) and at No. 3 Aquinas (12-4).
Division 6
St. Anthony (20-7) at Whittier Christian (13-14) >> The Heralds, who won at Nuview Bridge (12-3) in the first round, are led by sophomore Hailey Gallegos (.562, 22 RBIs) and freshman Jaden Hernandez (.294, 23 RBIs).
St. Anthony is the No. 3 seed.
Garden Grove Santiago (23-2) at Schurr (20-3-1) >> The host Spartans have won six consecutive games, including playoff wins over Crean Lutheran (9-1) and Chadwick (11-0).

Tuesday’s second round
3 p.m. unless noted 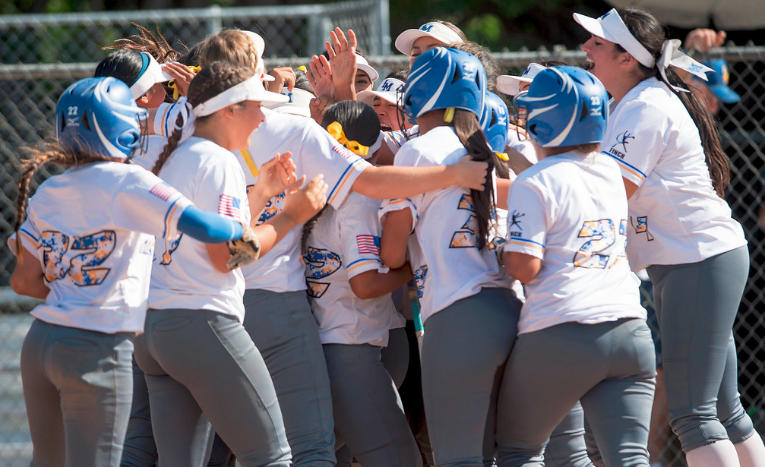 By Stephen Ramirez
LA MIRADA >> La Mirada High School, after losing its final two regular-season games last week, didn’t come into the CIF Southern Section softball playoffs on a positive note. But success in the postseason usually comes from flushing both the bad and the good and moving forward.
La Mirada definitely showed it could do that Thursday.
Madison Bogdanovich hit a three-run home run and Djhane Valido had three hits to lead a 13-hit barrage as the Matadores opened the Division 3 playoffs with a 14-1 victory over visiting Irvine in a first-round game that was halted in the fifth inning due to the 10-run rule.
La Mirada (21-8-1) will travel to Patriot (24-4), a 4-3 winner over Summit, for the second round on Tuesday.

“I just think as a team we were ready to fight,” Bogdanovich said. “Today, we just played for our seniors. We talked about it before the game and said we didn’t want it to be our last game.
“Last week we didn’t play well. Today, we came together as a team and fought hard until the end.”
Irvine (13-13) took a 1-0 lead in the second on a home run by Michelle Matsuo. But it was all La Mirada after that.
The Matadores scored all 14 runs in the final three innings, including an eight-run fourth.
La Mirada took a 2-1 lead in the second on singles by Valido and Jessica Martinez and consecutive fielder’s choice bunts for the advantage.
The Matadores pushed it to 6-1 in the third on RBIs by Martinez, Alyssa Hana and Kayla Gutierrez.
“Sometimes those weeks (like last week) are good; sometimes you’re scared going into the playoffs,” La Mirada coach Brent Tuttle said. “We had a good couple of practices. We need to hit, and last week we didn’t hit.
“Today, we told them to be aggressive, and if you see something (good), drive it. We had some big hits today.”
Bogdanovich highlighted the eight-run fourth with a three-run home run to center field for a 9-1 lead.
“I was just looking for a good pitch to hit,” Bogdanovich said. “The first pitch was right there and I swung. That’s it.”
Faith Hickman, who gave up five hits and struck out five, retired the Vaqueros in order in the fifth to secure the victory.
OTHER SCORES
SOFTBALL
DIVISION 1
La Habra 9, Yorba Linda 3
DIVISION 2
Santa Monica 7, St. Paul 2
Brea Olinda 6, La Serna 3
DIVISION 3
Paraclete 8, Cal 7
DIVISION 4
Whittier 10, Mira Costa 6
San Marcos 9, Montebello 3
DIVISION 6
Whittier Christian 12, Nuview Bridge 3
Schurr 11, Chadwick 0
TUESDAY’S SECOND ROUND
Division 1
La Habra at Corona Santiago
Division 3
La Mirada at Patriot
Division 4
Whittier at Beaumont
Division 6
No. 3 St. Anthony at Whittier Chr.
Garden Grove Santiago at Schurr
BASEBALL
Division 3
Paso Robles 7, Cantwell-Sacred Heart 1
No. 4 Walnut 5, California 0
Santa Fe 2, Torrance 1
FRIDAY’S FIRST ROUND
Division 2
Temescal Canyon at La Mirada
Division 4
Schurr at Serra
La Serna at Nogales
Sierra Vista at Sonora
TUESDAY’S SECOND ROUND
Division 3
No. 3 Don Lugo at Santa Fe