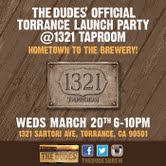 Dudes’ Brewing Company has been making the rounds of beer-centric South Bay watering holes in the likes of Redondo Beach and El Segundo in recent days introducing their line of craft beer.

“We will be featuring all four of their beers that day, along with their brewmaster, investors, and crew,” said 1321 spokeswoman Christina Long. “We’re giving away Dudes’ pint glasses and other goodies.”

Chef Jacob Kear, formerly of Father’s Office, has taken over the kitchen and revamped the menu (gone is the popular beer and bacon night pairings, although the mac & cheese was wisely retained).