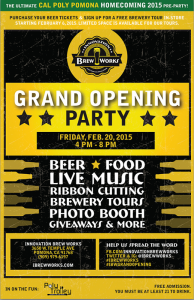 The brewery is looking to add a house-brewed IPA and American golden ale to the board for the grand opening.