Viktor Postol weighed 139 1/2 pounds and Terence Crawford came in at the 140-pound limit for their junior welterweight title-unification bout (on HBO pay-per-view).

The semi-main event will feature a vacant featherweight world-title fight between Oscar Valdez (19-0, 17 KOs) of Mexico and Matias Rueda (26-0, 23 KOs) of Argentina. Valdez weighed in at the 126-pound limit, Rueda came in a pound light at 125. 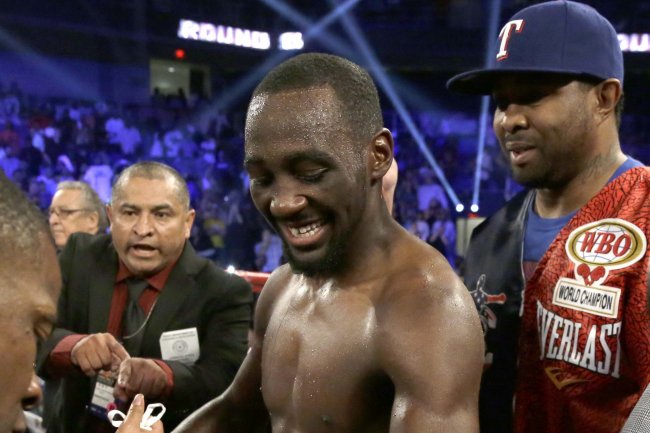 John Molina of Covina has lost his past two fights, but they were to former interim world champion Lucas Matthysse and former world champion Humberto Soto and Molina gave both of them a hard time, so there is no shame there.

Molina decked Matthysse twice in their fight in April 2014 at StubHub Center before Matthysse knocked out Molina in an absolute thriller. It was so thrilling that Wednesday the Boxing Writers Association of America named it Fight of the Year for 2014.

Molina (27-5, 22 KOs) was defeated via unanimous decision by Soto, losing by three, three and five points on the scorecards this past September at MGM Grand in Las Vegas.

Molina’s competitiveness against those fighters as well as his courage and heavy punch are probably why he’s getting another big fight. That will be March 7 against another former champion – Adrien Broner – at MGM Grand in Las Vegas (on NBC).

Molina on Wednesday played host to a media workout at Justin Fortune’s gym in Hollywood. As usual, he was confident.

“The Soto fight was a learning experience,” Molina said. “But going in as the underdog is about going in and doing your job. I’ve had a lot of success as an underdog. I just took the positives from my last fight and tried to make the best of it and now I’m here today with the golden ticket in my hand.

“To see where I’m at today after all I’ve gone through in my career, I’m in awe sometimes. But we’re just barely getting started.”

They will tangle on the undercard of the welterweight title-unification bout between Floyd Mayweather Jr. and Marcos Maidana.