Danny Garcia, left, lands a left hook to the jaw of Robert ‘The Ghost’ Guerrero in January at Staples Center/AP photo by Mark J. Terrill

Danny Garcia of :Philadelphia won the vacant welterweight world title with a unanimous decision over Robert “The Ghost” Guerrero on Jan. 23 in Los Angeles. But Garcia won’t make his first defense until next year.

In the meantime, Garcia will take on Samuel Vargas (25-2-1, 13 KOs) of Colombia in a non-title bout Nov. 12 from Liacouras Center in Philiadelphia (on Spike). It is expected to act as a tune-up for a title-unification bout with Keith “One Time” Thurman in 2017. The fight will also be part of a charity drive Garcia is fueling.

Garcia is teaming up with Philabundance – the region’s largest hunger relief organization – on a regional food drive. Fans are being encouraged to drop off canned goods at the fight venue as well as a local boxing gym. Also, $10 from each ticket sold will be donated and provide 20 meals per ticket for the needy.

“My dad (trainer Angel Garcia) and I wanted to get one more fight in before the end of the year and there was no doubt in my mind it had to be in Philadelphia,” said Garcia, who has also been a champion at junior welterweight. “My team got it done and it’s a great feeling to fight at home over the holidays. I’m excited to use this opportunity to give back to the community and put on a show. This city means everything to me. I hope everyone comes out, but shows up with cans of food, too.

“I’m gearing up for a big fight with Keith Thurman next year that’s going to be a can’t-miss event.” 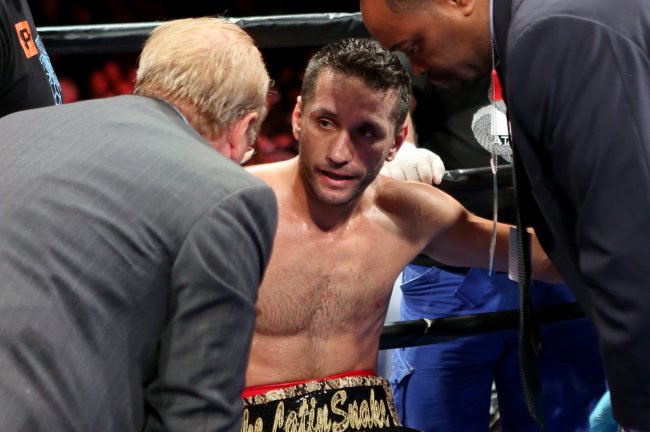 Robert “The Ghost” Guerrero didn’t like the decision that went against him
Saturday in his welterweight fight against David Peralta of Argentina at Honda
Center. A very close fight, Peralta won a split-decision by scores of 113-115,
115-113 and 116-112.

Guerrero didn’t speak to reporters immediately following the fight, instead
making his way to his dressing room. From there did come a comment that
spelled out what he thought about the scores – especially the 116-112 that
came from Max DeLuca.

“I thought I clearly won the fight,” Guerrero said. “For the judge to say I lost 8
rounds sounds crazy to me. Peralta was very awkward, but I felt I won. I won
the rounds when I boxed. This is very disappointing, but I’ll be back, that you
can count on.”

This newspaper – along with a couple of other publications – scored the bout a
114-114 draw. DeLuca’s score did seem out of line.